According the sources, Israeli extremist settlers led by the right-wing activist Bentzi Gopstein attacked late last night a group of Christians who were in a meeting hall in occupied Jerusalem.

The settlers chanted anti-Christian slogans during the attack.

The Bishops Council adviser in the Holy Lands, Wadi Abu Nassar, strongly condemned the attack, considering it a serious incitement against Christians.

He held Israeli government responsible for the settlers’ attack, calling for holding Gopstein accountable along with his followers.
18 aug 2016
Sit-in in Church of Resurrection to support hunger-strikers

A sit-in was staged by the Christian Community in Jerusalem’s Church of the Holy Sepulchre in solidarity with Palestinian hunger-strikers in Israeli jails.

Speaking on behalf of the sit-inners, Archbishop Theodoios of Sebastia Atallah Hanna said the vigil was staged in solidarity with the hunger-striking detainees, who have been starving in Israeli jails, to transmit their voices and restore their freedom.

“The sit-in is an embodiment of our sense of unity and fraternity,” Hanna stated. “This is a message that the Palestinian people is just indivisible.”

“Our pains are one and the same, just as our tragedy, unity, and cause are. We are on the same road towards liberation and restoration of our usurped rights,” Hanna further stated.
15 aug 2016
Evangelical Lutheran Church Votes to Divest from Israeli Occupation

by Anna Baltzer, US Campaign to End the Occupation

On Friday, the Evangelical Lutheran Church in America (ELCA) voted overwhelmingly — by an estimated 90% — to create an investment screen that would identify and remove the Church’s investments in corporations profiting from Israel’s violations of Palestinian rights, and other human rights abuses around the world.

The new screen has a broad reach, ensuring that the Church would avoid investments in corporations currently complicit in human rights violations as part of the Israeli occupation, as well as any future corporations that become complicit.

“As a Native woman, the situation in Palestine reminds me of what my people have gone through here in America. I have seen my people lose our land, our lives, our culture — our songs, dances, spiritual ways. Like the Palestinians, we have no justice. Treaties have been broken… We talk about loving our neighbor. We talk about justice. But where is the justice?… Now is the time for the church to stop profiting from these injustices. Now is the time to bring healing, to bring peace, to bring justice.”
11 july 2016
US Churches Advance BDS Initiatives 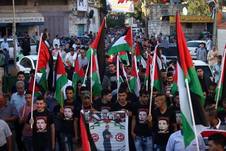 The Palestinian BDS National Committee (BNC), the broadest coalition in Palestinian civil society, has offered its congratulation and thanks, to both the Presbyterian Church (USA) and the Unitarian Universalist General Assembly, for their respective and powerful votes, in the weeks past, towards advancing solidarity with Palestinian rights under international law within faith communities in the United States.

The Presbyterian Church (USA) assembly expanded upon its historic 2014 decision to divest from US corporations profiting from Israel’s occupation and violations of international law, by recommending to the Presbyterian Foundation and Board of Pensions to refrain from investments which support violence against both Palestinians and Israelis.

Furthermore, it was decisively voted to prayerfully study the BDS Call, issued by the absolute majority in Palestinian civil society in 2005, and to engage with its authors and sponsors.

The Presbyterian Church (USA) assembly overwhelmingly called on Israel to end its gross mistreatment of Palestinian children and on Re/MAX to follow through on a recent promise to stop profiting from sales of homes in illegal Israeli settlements. It also called on U.S. Congress to hold hearings on the use of U.S. military and police equipment by the Israeli government.

The Unitarian Universalist General Assembly majority (54%) voted to endorse the Unitarian Universalist Association’s recent divestment from companies complicit in Israeli apartheid. While falling short of the 2/3 majority needed to pass the resolution, this majority vote showed clear support for the church’s prior action to divest from companies profiting from Israeli occupation and apartheid.

Other faith communities that have adopted economic measures against Israel’s occupation in the last 2 years include the United Methodist Church, United Church of Christ, Quakers, Mennonite Central Committee, the Catholic Conference of Major Superiors of Men [PDF], and the Alliance of Baptists.
Original article at BDS official.
23 june 2016
Israeli Extremists Attack Palestinian Christians During Pentecost Prayer, Shouting “You Are Evil”

A group of Israeli extremists assaulted the Pentecostal prayer procession in Jerusalem this week, shouting and trying to occupy Mount Zion to keep the Christians out.

The Israeli police arrested five demonstrators who locked themselves in the holy site known as King David’s Tomb before the Christian procession arrived.

The protesters consisted of right-wing religious Jewish Israelis who wore traditional Jewish yarmulkes on their heads as they screamed and shouted at the Christian worshipers, and tried to physically attack them.

Israeli police blocked the crowd of several dozen demonstrators, but some got through and hit some of the Eastern Orthodox Christian worshipers, according to local sources.

The Pentecostal procession is an annual event in which Eastern Orthodox Christians pray at the presumed site of the Last Supper.

According to the Israeli paper Ha’aretz, one ultra-Orthodox protester who identified himself as Tzvi told them, “It hurts me that they are letting these goyim (non-Jews) come here. It hurts me that these evil men, who have oppressed the Jews throughout history, are being allowed to contaminate our holy sites. And it hurts me even more that the police, led by our Jewish government, are allowing them to do so.”

Although King David’s Tomb is supposed to be open to people of all religions to pray, it has unofficially been turned into a synagogue, and Jewish rabbis prevent any non-Jews from entering, apart from five times a year when Christians are allowed to enter to commemorate holy days.

As the procession, consisting of many members of the Eastern Orthodox hierarchy, made its way up Mt. Zion to the Room of the Last Supper, the Israeli protesters shouted, “We will tear down this abomination! You are evil!”

The Christian elders and brothers stayed in the tomb only a few minutes, and were met by loud booing and hissing the whole time. As they left, the Israeli daily Ha’aretz reports that one ultra-Orthodox demonstrator shouted, “The goyim got their way this time. But they won’t the next time. King David lives forever! The people of Israel live forever!”
18 june 2016
Haaretz: J'lem churches leased land to Israeli firms for long decades

Haaretz newspaper has revealed that Israeli companies have bought leases on church-owned land for protracted periods of time in the central part of Occupied Jerusalem.

One of those companies whose owners include Shlomo Dery, brother to the interior minister and deputy head of the Jewish national fund, has bought the lease on the Jerusalem area of Gan Rehavia from the Catholic Church, according to the newspaper.

Gan Rehavia, an area of Rehavia quarter, contains about 70 apartments. The current lease expires in 19 years, after which the land and all the apartments on it will become the company’s property.

As a result, if the residents have not sold their homes by 2035, they will be forced to vacate without receiving any compensation.

The newspaper pointed to the presence of similar deals under which commercial companies have bought up leases in Jerusalem from various churches.

Large parts of central Jerusalem are built on church-owned land that was leased for 99 years in the mid-20th century, and many of those leases will expire in the coming decades.

Two weeks ago, for instance, Haaretz reported that the 32 families who live in Rosh Rehavia, another section of Rehavia quarter, are being forced to sell their apartments for about half of their market value because the lease has been sold to private entrepreneurs.

Their lease expires in 2034. It now turns out that the lease for Gan Rehavia, which is on the other side of the Ratisbonne Monastery from Rosh Rehavia, has been sold to the same entrepreneur, Moshe Idan.

But this time, Idan has partners in the venture, one of whom is Shlomo Dery. Over the coming decades, hundreds of families in central Jerusalem will face similar problems.

The churches, mainly the Catholic and Greek Orthodox ones, own land in many Jerusalem neighborhoods, including Rehavia, Talbiyeh, Nayot and Rassco. The 99-year leases on this land were signed in 1950 or 1951, so they will expire in another 33 or 34 years, but the land around the Ratisbonne Monastery was leased in the 1930s, so residents of this area are the first to face the problem.

The churches do not want to deal with the problem themselves, so they are instead selling the leases to private entrepreneurs, usually for another 200 years.

The Gan Rehavia residents are now being told they must either sell their apartments to the company for half their market value, or buy the lease from the company at a similar price. If they do neither, they will be forced to vacate with no compensation in another 19 years.

"There is approximately 20 years to go, which means that every year, the residents are losing about five percent of the value of their apartment," a source who knows the terms of the deal said on condition of anonymity.

"Nobody knows what will happen," one Gan Rehavia resident said. "I am not optimistic, but maybe there is a chance that toward the end of the lease, something will happen.

Maybe the authorities will pass a law. The problem is that the entrepreneurs have property rights, and they will fight for them." But everyone involved in the issue agrees that the more time passes and the more private entrepreneurs take over the churches’ leases, the less likely it is that the competent authorities will do anything to address the issue.
29 may 2016
Hanna: Judaization conducted under cultural, artistic themes in Jerusalem

Greek Orthodox Archbishop of Sebastia Atallah Hanna expressed his refusal of the cultural and artistic events being conducted by Israeli authorities in Occupied Jerusalem under the theme: "Lights of Jerusalem”.

He opined that these events aim at Judaizing the occupied city of Jerusalem by changing its historic Arab and Islamic landmarks.

In a statement on Saturday, Hanna said, "These activities are dangerous since they are implemented under the veil of civilization and culture while in reality they are political events against the holy city and its people".

He pointed to the suffering of the Jerusalemite people who complain about the Israeli aggressive practices that restrict their movement and target their existence in the city.

Archbishop Hanna also slammed the silence of the world towards Israeli aggressive practices in Occupied Jerusalem.
Page:  4 - 3 - 2 - 1
Powered by