The Mayor of Bethlehem, Vera George Baboun, delivered this years’ Christmas message of peace and justice during the annual official Christmas tree lighting ceremony, held on December 4th, at the Manger Square in front of the Church of Nativity in the Palestinian city of Bethlehem.

The ceremony was carried out with the participation of many officials, scout troops, religious and social figures and thousands of locals.

Baboun said that the Christmas tree was lit this year after being decorated with gold colors and bright festive lights, “to send a message in letters of gold to the entire world about Palestine, and the struggle for independence.”

She added that the participation of children in these official celebrations and ceremonies to light the tree was meant to embody the real message of Christmas, a message that compassion and mercy are the spirit of Christmas.

The celebration started with the lighting of the tree, while local scout troop bands played the Palestinian National Anthem.

Palestinian Prime Minister, Dr. Rami Hamdallah, and many officials, social and religious figures, and thousands of Palestinians, and tourists, participated in the celebrations.

It is worth mentioning that the Oslo Philharmonic Choir, and a choir of nuns from Malta, in addition to various local artists, played Christmas music, and sang religious songs and songs for peace, during the ceremony.

Dr. Hamdallah said that the Israeli occupation is denying the Palestinian children the right to a peaceful childhood, and added that Israel is still holding captive more than 350 children, in addition to keeping its deadly siege on the Gaza Strip and engaging in ongoing violations, including attempts to remove the indigenous Palestinians from occupied Jerusalem.

Patriarch Moran Mor Bechara Boutros al-Rahi, the head of the Maronite Church, said that the star of Bethlehem will always shine, and the Christmas tree in the city is an invitation to all to light the candle, the flame, of faith, of peace and justice.

He called on the international community to act and lift the injustice inflicted on the Palestinian people by the ongoing illegal Israeli occupation.

The Mayor of Lourdes – France, Bourdeu Josette, who attended the celebration sent a message of peace from her city, and spoke of the sister-city relations linking Bethlehem with Lourdes, and the joint message of peace and love.

Prior to lighting the tree, Prime Minister Hamdallah and Mayor Baboun released balloons carrying the message of peace from Bethlehem, while church bells rang in the city, and in every part of Palestine. (Video)
WCC Activist Denied Entrance to Occupied Palestine

Israeli authorities, on Tuesday, prevented Dr. Isabel Perry from entering into the occupied Palestinian territories (oPt), claiming she is an activist of the World Council of Churches, which supports the boycott movement against Israel.

Local media said, according to Al Ray, that it is the first time the Israeli occupation prevented a tourist because of activity in the boycott movement.

The Interior Minister of Israel, Arye Deri, and the Minister of the Public Security and Strategic Affairs, Gilad Erdan, were responsible for making the decision of blocking Perry’s entry.

Dr. Isabel Perry, a citizen from Malawi and an expert in religious affairs, arrived at Ben Gurion Airport on Monday.

A bill preventing supporters of the Boycott, Divestment, and Sanctions (BDS) movement from entering Israel was authorized in early November, for its first reading in the Knesset.

Deri considers approval of Perry’s request to enter the oPt to be encouragement for activities which  are in opposition to Israel’s policies.
6 dec 2016
Christian figures call for protecting Jerusalem’s Arab identity

Christian religious figures have called for necessarily protecting the Arab identity of Jerusalem and its Christian and Islamic holy sites against Israel’s Judaization policy.

This came during a symposium on Jerusalem and its Christian holy sites organized in Beirut by al-Quds International Institution as part of the activities of the 60th International Arab Book Fair.

The symposium, which was attended by religious, political and intellectual figures, was introduced by head of the media department at al-Quds Institution Mohamed Tarboush, who described the Christian presence in Jerusalem as a “deeply-rooted part of the Arab identity of the city.”

In his speech, father Antoine Daou, secretary-general of the Episcopal Commission of the Islamic-Christian Dialogue in Lebanon, stressed the importance of upholding the Arab identity of Jerusalem to protect its history, presence and future against Israel's Judaization activities.

For his part, Greek-Orthodox church Bishop Luke Khoury said that “the Christians in Palestine and Jerusalem are exposed to cruel persecution by the Israeli occupation,” which he accused of seizing their lands and properties and attacking churches and monasteries.

“The Zionist occupation’s measures have displaced the majority of Christians from their towns and villages and forced others to migrate under the yoke of obnoxious occupation, while a group of them are still steadfast living in very harsh political, security and economic conditions,” he said.

Palestinian factions have condemned the decision of the Greek Patriarch Theophilos to cut off the salary of Palestinian archbishop Atallah Hanna due to his outspokenness and principled stances on Palestinian rights.

Such a measure would not help solving problems, a statement by the factions said and expressed solidarity with the archbishop.

The factions called for addressing the differences in a spirit of fraternity.

On the other hand, the national factions expressed gratitude for the Palestinian Christians who refused Israel’s Adhan ban bill in occupied Jerusalem.

The statement also hailed Father Manuel Musallam’s national position after he raised Adhan in a church in a bid to protest against the Israeli bill which would prohibit mosques from using loudspeakers for delivering call to prayer (Adhan) in occupied Jerusalem.
3 dec 2016
Palestinian PM denounces Israeli occupation during Christmas tree lighting in Bethlehem

Hamdallah was joined by the Minister of Tourism Rula Maaya along with the governor of Bethlehem Jibrin al-Bakri, the mayor of Bethlehem city Vera Baboun, and hundreds of citizens.

"The message of mercifulness which we launch today from the land of Palestine as it embraces Christmas to the whole international community and to all countries of the world, is that it's time the Palestinian people gain their freedom and independence, and that Israel has to stop its violations against our people, our land, and our holy places," Hamdallah said in a speech during the ceremony.

“The Israeli occupation,” added Hamdallah, “has been depriving Palestinian children of enjoying their childhood appropriately, and has instead been sending them to jails.”

“About 350 Palestinian children and minors are serving in Israeli jails, and Gaza is moaning under a crippling siege which confiscated all the constituents of life leaving our people prey of illness, poverty, and pollution."

Hamdallah accused Israel of tearing down more opportunities for peace and more efforts to resume the process "despite that our people, both Muslims and Christians long for peace, freedom, mercy, and human justice as they cling to their heritage of coexistence, brotherliness, and love."

On this day last year, 106 Palestinians had been killed by Israelis in a wave of unrest that began in October 2015, and has continued into the present, with a total current death toll of 245 Palestinians and 36 Israelis.

During last year’s tree lighting ceremony, mayor Baboun said in a press conference that it was Bethlehem's "duty" to go ahead with the celebrations, despite the ongoing violence that overshadowed the celebrations.
17 nov 2016
Israeli Colonists Cause Damage To The Church of Holy Sepulcher, Attempt To Occupy It 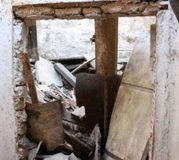 Many extremist illegal Israeli colonists, living in an outpost above the Church of Holy Sepulcher, in occupied Jerusalem, attacked the church property, causing damage, and attempted to occupy a room belonging to the church.

The attack caused excessive damage to the church property, while priests and church officials called the police, who later came to the church and were shown the damage.

The Nativity TV in Bethlehem has published a video of the attack’s aftermath, also showing a Greek Orthodox priest talking to Israeli police officers while inspecting the damage.

The video also shows illegal settlers in their outpost right above the building, with the Israeli flags raised above it.
15 nov 2016
Atallah Hanna strongly condemns Adhan ban

Hanna considered the Israeli ban as “a dangerous and unprecedented step that comes as part of Israel's racist policy aiming to Judaize Jerusalem”.

Today, they are targeting mosques and tomorrow is the churches’ turn, he said.

We will remain in our lands and we will never give up our holy city, Hanna added. Our mosques and churches will forever be a source of peace, love, and brotherhood.

Father Atallah Hanna, Archbishop of the Palestinian Orthodox Church in Occupied Jerusalem, has expressed his rejection of any visits by Arab figures and delegations to Palestine in order to normalize relations with the Israeli occupation.

“We noticed lately that there were visits of a pro-normalization nature that were far away from any solidarity with the Palestinian people.

They are political and media figures visiting Palestine in order to show solidarity with the occupation without any consideration for any moral, human or national values,” Father Hanna stated in a press release.

He condemned, in particular, a delegation of Arab media figures for visiting Palestine nowadays, describing their visit as “an unprecedented pro-normalization activity.”

The Archbishop stressed that such visits would harm the Palestinian cause and serve the Israeli occupation that seeks to promote its story and justify its policies towards the Palestinian people.

“Such suspicious visits that we have seen recently are a serious and worrying development,” he said, affirming that he would not receive any members of these delegations during their visit to Jerusalem.
1 nov 2016
Tension over raising Israeli flag on Holy Sepulchre Church

The High Presidential Commission for Church Affairs in Palestine strongly condemned Tuesday the raising of Israeli flag over the eastern entrance to the Holy Sepulchre Church.

Raising the Israeli flag on Holy Sepulchre Church is a flagrant violation to the 2012 resolution which recognized Palestine as a non-member observer state in the United Nations, the commission said.

The commission stressed the importance of maintaining the Status Quo Law in occupied Jerusalem which preserves freedom of worship for all religions, and prevents the raising of any flag over holy places.

It also called for standing firmly against any Israeli attempt to impose control over the Palestinian holy places.

Earlier on Monday, Israeli extremist groups raised the Israeli flag over the Holy Sepulchre Church.
2 oct 2016
Musallam to Abbas: Look for a cave among Israeli thieves to live in

Father Manuel Musallam, pastor of the Latin Church in Gaza, has launched a scathing attack on Palestinian Authority president Mahmoud Abbas for his recent participation in the funeral of former Israeli president Shimon Peres.

In Facebook remarks on Saturday, Father Musallam started his message to Abbas with the famous popular adage saying that "everything is a debt or a loan, even eye tears."

"Did Sharon attend the funeral of Abu Ammar and lamented him, Mr. President, in order for you to pay the debt with crocodile tears over Peres?

Did the bells of Churches ring and were the sounds of the holy Qur'an recited from minarets in grief in order to convey your love to the house of the deceased Zionist who killed your people, occupied your land and sucked the blood of your martyrs?" He rhetorically questioned.

"Today, as a result of your actions, Israel has really occupied the entire Palestine. Today, your national project collapsed along with the Palestinian Authority and all its institutions," the Palestinian clergy said.