The Qatari government will pay the July salaries of civil servants in the blockaded Gaza Strip, a Qatari diplomat said Tuesday.

"The Qatari grant for the Gaza civil servants’ salaries, valued at $31 million, will be paid out one time only," Ambassador Mohamed al-Emadi, head of Qatar’s National Committee for the Reconstruction of Gaza, said at a press conference.

The payment, he noted, would be disbursed via the UN and would not apply to salaries owed to Gaza’s security forces.

At Tuesday’s press conference, al-Emadi said he had received a list including the names of more than 23,800 civil servants in Gaza who met the requirements of the grant.

Last week, the Qatari ambassador arrived in Gaza City, where he is expected to sign a number of reconstruction projects worth a total of $40 million.
Israeli municipality razes car showroom in Sur Baher town 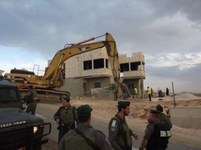 Israeli bulldozers on Tuesday demolished an automobile showroom in Sur Baher town, southeast of Occupied Jerusalem, at the pretext that it was unlicensed.

Eyewitnesses said Israeli troops provided protection for an Israeli municipal crew during the demolition of the showroom, which belongs to Mohamed Aliyan.

MP Jamal al-Khudari, head of the public committee against the siege, said that the Israeli refusal of establishing Gaza seaport tightens the siege.

In a press statement on Monday, MP Khudari pointed out that Gaza seaport is a right for the Palestinian people stipulated for in the international agreements.

It is one of the determinants of ending the siege totally besides opening of crossings, free commercial exchange, opening the safe pathway that connects Gaza to the West Bank and reconstructing and re-operating Arafat International Airport, he said.

Khudari called for concerted Palestinian effort and putting pressure at the local, regional and international levels for establishing the seaport as a complementary not alternative to commercial crossings and called for accomplishing all of those determinants.
Council: Palestinians in need of 30,000 housing units in Jerusalem

Until 2020 Jerusalem will be in need of 30,000 housing units, the Palestinian Housing Council said Monday.

The council’s technical director in the occupied West Bank, Zuheir Ali, said, at a workshop held in al-Bireh under the title “Housing in Occupied Jerusalem: Facts and Challenges,” that the Palestinians have been facing difficulties in constructing new homes on at least 13% of east Jerusalem lands.

Ali added that Israeli restrictive measures resulted in a sharp housing crisis and that Occupied Jerusalem is in need of 30,000 housing units, to the tune of around three billion dollars, until 2020.

Chairman of the council’s Management Board, Hesham al-Omari, said the council has done every possible effort to provide homeless Palestinians with 8,000 housing units with a total value of up to 205 million dollars.

Representative of the Organization of Islamic Cooperation in the occupied Palestinian territories, Ahmad al-Ruweidi, sounded the alarm over the tragic situation endured by Palestinians in Occupied Jerusalem in light of the crippling procedures perpetrated by the Israeli occupation as regards construction licenses.
Israel to raze agricultural structures, wells in Qusra village

According to specialist in settlement affairs Ghassan Daglas, the structures and wells are located in the eastern area of the village and near the Esh Kodesh settler outpost.

The Israeli army claimed these structures and wells had been built without permits.

These intended demolitions are part of Israel's systematic ethnic cleansing policy against the Palestinians, which target their existence on their land.
1 aug 2016
Salfit lands swallowed up by 24 Israeli illegal settlements

24 Israeli illegal settlement units in Salfit have torn Palestinian towns and villages from limb to limb and depleted agricultural lands.

Talking in an exclusive statement to the PIC, researcher Khaled Maali said the increasing pace of illegal settlement expansion crushed the master plans for Palestinian towns and villages.

Palestinians have been banned from constructing residential homes over the territory after Israel claimed it as part of Area C.

According to Maali, the illegal settlement expansion has affected Salfit province as it has done all other areas of the occupied West Bank, a home to over three million Palestinians.

The Israeli occupation authorities have also prevented developmental projects for Palestinians in such locations as Area A, in a flagrant violation of the Oslo Accord.

Israel has even held sway over Palestinians’ natural resources including water.

Jenin’s and Salfit’s water supplies have been cut by half under counterfeit pretexts.

Maali warned of an Israeli preplanned attempt to wipe out Palestinians’ presence and to boost illegal settlements across the occupied territories, a plan that has also been nurtured by arbitrary home demolitions under the unlicensed construction pretext.

24 illegal settlement outposts, including four industrial zones and three nature reserves, along with streets, bypasses, military camps, and watchtowers, have turned Salfit from the “olive province” to an area engulfed by apartheid walls and illegal settlements from all corners.

Maali warned that in case Israel keeps up such a pace for illegal settlement activity Palestinians in Salfit and in the occupied West Bank will barely, if ever, have lands to cultivate, earn from, or even live in.
28 july 2016
Israeli Navy Attacks Palestinian Boats, Kidnaps Seven Fishers, In Gaza Waters

The WAFA News Agency quoted a fisher stating that the navy boats attacked them from several directions, and fired many rounds of live ammunition, causing damage, kidnapped seven fishers and confiscated their boats.

The navy illegally confiscated the boats before moving them to the Ashdod Port.

On Wednesday, the Israeli navy attacked Palestinian fishing boats, close to the Gaza shore, and kidnapped two fishers. Some of the boats were hit with live rounds, before the soldiers assaulted them.
27 july 2016
Israel cuts water supply to Salfit by half

Amid scorching summer heat, the Israeli occupation authority (IOA) has reduced anew the water supply to Salfit province by 50 percent, causing some damage to cultivated plots of land.

Local researcher Khaled al-Ma'ali said that the IOA uses false pretexts to create a water crisis in order to put pressure on the Palestinian population in Salfit and other West Bank areas.

Ma'ali stressed that Israel's reduction of water supplies to Palestinian areas violates the international humanitarian law, which prohibits any occupying power from taking any action that adversely affects the lives of civilians living under its occupation.

The Palestinians in all areas of the West Bank suffer from acute water shortages because of Israel's control of water resources.
22 july 2016
Qatar to pay Gaza employees' salaries

Qatar’s Emir Sheikh Tamim bin Hamad Al-Thani has directed that the salaries for Gaza Strip employees for the current month of July be paid, a total of QR 113 million.

Qatar news agency affirmed that the Qatari Emir is “keen on alleviating the suffering of brethren in the Strip and the severe financial distress they are facing due to the unjust siege imposed by the Israeli occupation on them.”

Gaza’s employees were not paid for more than two months after Hamdallah’s government did not fulfill its pledges.
21 july 2016
Israeli naval forces arrest 4 fishermen at Gaza sea

The forces confiscated the fishing boats and steered them to Ashdod Israeli port.

Nizar Ayyash, head of the Palestinian fishermen syndicate, told Quds Press that arresting the Gazan fishermen and confiscating their boats took place within the allowed fishing zone of 6 nautical miles.
20 july 2016
Army Uproots Olive Trees in Salfit, “Settlers Only” Road to be Opened

Israeli soldiers, on Wednesday, uprooted olive trees in the village of Deir Istiya, Salfit governorate, under the pretext of opening a road designated for the sole use of people residing in illegal West Bank settlements.

He noted that town officials had contacted the Palestinian military liaison with Israel and informed them of this development.

According to the International Solidarity Movement (ISM), “The destruction of farmland, which is illegal under international law, is just one form of oppression that the Palestinian farmers are facing.”

According to the OCHA monthly report for June 2016, “The allocation of public land to settlements and the takeover of private land by settler groups have reduced the space available for Palestinians to sustain their livelihoods in an increasingly fragmented West Bank and have impacted on a range of human rights.”

“Combined with the unlawful and discriminatory zoning and planning policy applied in Area C and in East Jerusalem, these settlement-related phenomena have undermined the living conditions of Palestinians and rendered them increasingly vulnerable, including to the risk of individual or mass forcible transfer.”

The report stated, “The creation of new facts on the ground through demolitions and settlement building raises questions about whether Israel’s ultimate goal is, in fact, to drive Palestinians out of certain parts of the West Bank, thereby undermining any prospect of transition to a viable Palestinian state.”
19 july 2016
Israeli Soldiers Demolish Several Structures In Silwan

The Wadi Hilweh Information Center in Silwan (Silwanic) said the soldiers, and personnel of the City Council, invaded Abu Tayeh area in Ein al-Louza neighborhood in Silwan, and closed several roads before demolishing a room, a parking lot and stores, belonging to the families of Abu al-Hamam and Abu Tayeh.

The military bulldozers also demolished a 39-square meter room, and three parking garages; each was 25 square meters, built from bricks and tin plates, nearly eight years ago. The owner of the demolished properties has been identified as Arafat Abu al-Hamam, Silwanic said.

Furthermore, the soldiers demolished a 30-square meter car-repair shop and carwash facility, owned by Abu Tayeh family. The structure was built from tin plates more than ten years ago.

The family said the soldiers refused to allow them to remove their equipment from the demolished structure, and that the equipment alone costs nearly 50.000 Israeli Shekels.
15 july 2016
Haaretz: Israel tightened siege on Gaza

Haaretz newspaper said Friday that Israel recently tightened its blockade on the Gaza Strip and reduced exit permits for the population, especially for merchants and businessmen.

According to Haaretz, the Shin Bet, Israel's internal intelligence, has cancelled, in recent months, regular exit permits for about 1,400 merchants of some 3,700 businessmen who already received long-term exit permits in recent years.

In another step that has also an immediate and very damaging effect on Gaza’s economy and the efforts to rehabilitate it, the Shin Bet has started to bar certain businessmen from importing their merchandise into Gaza.

The Shin Bet refuses to give any explanation for banning the entry of certain imports to Gaza and only describes the measure as "taken for security reasons."

Others who are also affected by Israel's growing movement restrictions and travel bans in Gaza include senior officials in charge of infrastructure and rehabilitation, doctors and academics who take in-service training courses and exams in the West Bank, people with medical conditions, those with families abroad and in the West Bank, and workers for international humanitarian groups and diplomatic missions.