Silwanic stated that the soldiers invaded the area, after isolating it since early dawn hours, and demolished the carwash building, that was built more than 4.5 years ago, and that the demolition was conducted without a prior notice.

The soldiers also demolished three buildings, 12 square/meters each, and were used to store goods and car accessories.

On Tuesday, the soldiers demolished a residential building in Wadi al-Jouz neighborhood, in Jerusalem, and another building in the al-‘Eesawiyya town, in addition to demolishing sections of an apartment, rendering it unsafe.

It is worth mentioning that the owner of the building, Mohammad al-Hadra, filed an urgent appeal with an Israeli court, but the army went ahead and demolished it before ruling was reach on the pending appeal.
Israeli army knocks down Palestinian stalls

The Israeli occupation army overnight Tuesday knocked down Palestinian barracks and commercial stalls on the access road to the Israel-run al-Tiba roadblock, in western Jenin province.

A PIC news reporter quoted eyewitnesses as saying that Israeli army bulldozers demolished Palestinian booths on either side of the road without prior notifications.

The demolition process was reportedly carried out under the pretext that the targeted structures were built in the Israel-controlled Area C.

A couple of days ago, the Israeli occupation army leveled Palestinian stalls near the al-Jalama roadblock, to the north of Jenin province.

Impoverished Palestinian civilians have been using the stalls to earn a living for their children in the occupied Palestinian territories by selling small sandwiches or a handful of season fruits.
8 nov 2016
Clashes as Israeli fanatics storm Joseph Tomb in Nablus

According to eyewitnesses the break-in was carried out at 01 a.m. via the Beit Furik and Al-Ghawi crossroads. Two settler batches stormed the area, sparking clashes with the Palestinian protesters.

Palestinian citizen Ahmad Al-Salman said that 700 fanatic settlers, crammed into Israeli buses, forced their ways into the plaza and environs of the shrine.

The clashes spread out to Balata camp and Amman Street, where the occupation troops attacked the Palestinian protesters with heavy barrages of teargas canisters, resulting in several suffocation cases.

Palestinian citizen Nidhal Kaabi, from Balata camp, said civilians could not reach the local mosque, adjacent to Balata’s northern entrance, to perform dawn prayers due to the presence of Israeli soldiers, who withdrew at 5:30 a.m.

Over recent days, extremist settler gangs announced their intent to storm Joseph’s Tomb and called for mass participation in the break-in.

In another development, the Israeli occupation army seized machinery from a Palestinian workshop in the northern West Bank city of Jenin.

Earlier, the occupation forces claimed responsibility for the confiscation of the equipment of over 120 workshops in the West Bank on claims that they were used to manufacture homemade weapons.

Violent confrontations burst out in the area following the assault.

A few hours earlier, the occupation patrols came down heavily on the Palestinians of Zabouba town, to the west of Jenin, and sealed off the main thoroughfare to the area with a military checkpoint as part of a policy of collective punishment against civilians.
7 nov 2016
Israeli police arrest 2 Palestinian women

The Israeli police forces arrested Monday afternoon two Palestinian women while leaving al-Aqsa Mosque and closed a wedding hall in occupied Jerusalem. Local sources said that the two Jerusalemite women were detained and taken to a nearby investigation center just after leaving al-Aqsa.

Eyewitnesses affirmed that Israeli forces stormed the town and broke into the wedding hall before pasting a copy of the closure order on the gate under the pretext of annoying the settlers in Ma'ale Adumim settlement illegally built on the town's land.

Israeli settlers have reportedly stolen olive crops gathered from land belonging to farmers from the village of Deir Sharaf, to the northwest of Nablus, a Palestinian official said on Monday.

Ghassan Daghlas, the Palestinian Authority official in charge of the settlements file in the northern occupied West Bank, told WAFA that the farmers discovered, when they returned Monday morning, to their lands located inside the border fence of Shavi Shomron settlement, to continue with the olive harvest, that their crop from the night before was missing.

He said that the farmers had a permit from the Israeli government to harvest their olive crops on land located inside the settlement fence for a few days, and for certain hours a day.

However, they believe that settlers from Shavi Shomron came to their land during the night and stole the harvest.

The farmers normally leave their crop on the land and collect it at one time, at the end of the harvest period.
Israeli Soldiers Invade Advertisement Company, Confiscate Computers, In Hebron 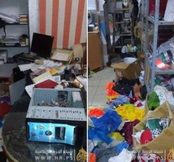 Israeli soldiers invaded, on Monday at dawn, an advertisement company, in the southern West Bank city of Hebron, violently searched it, causing excessive damage, before confiscating its computers, and other equipment.

Company workers said the soldiers invaded the Al-Manara Market, in the center of Hebron city, before storming the company, and violently searching it.

The company is owned by Rabrea’ Tarda, who said that the soldiers confiscated computers and other equipment, and caused excessive damage during the violent searches.

The soldiers also installed several roadblocks in the area surrounding the company, and prevented the Palestinians from entering or leaving it.
6 nov 2016
Soldiers Attack Olive Harvesters near Qalqilia

Israeli soldiers, on Sunday, attacked and wounded two Palestinians who were picking olives in the village of Kafr Qaddoum, east of Qalqilia, according to local WAFA sources.

Witnesses said that the soldiers attacked two farmers, identified as Abdul-Mahdi Hekmat, 16, and Qusai Aqel, 20, and also verbally assaulted them while they were tending their olive trees.

The soldiers also verbally assaulted Hekmat’s wife, and threatened her, her husband and Aqel  with death, should they approach their land once again.
3 nov 2016
IOF notifies Palestinian facilities south of Nablus with demolition

Mayor of Qasra Abdul Adhim Wadi told the PIC reporter that Israeli authorities notified a number of local farmers to demolish their agricultural facilities, located near Migdalim settlement illegally built north of the town, within seven days under the pretext of being built in Area C.

The notified facilities include EU-funded barns and water wells, the mayor said, adding that a water tank and a fence were also demolished in the area.

Demolitions in the occupied West Bank and Jerusalem have seen an unprecedented upsurge in recent months, as Israeli authorities demolished 905 Palestinian structures in the occupied Palestinian territories so far this year, in a big increase from 453 in all of 2015, according to UN documentation.
Army Demolishes Two Sheds And A Butcher’s Shop Near Nablus

Several Israeli military jeeps, and a bulldozer, invaded in Thursday at dawn Beita town, south of the northern West Bank city of Nablus, and demolishes a butcher’s shop and two sheds.

The invasion was carried out during early dawn hours after the soldiers surrounded the town and advanced from several directions.

Wassef M’alla, the head of Beta Local Council, said the soldiers demolished a butcher’s shop, belonging to Mohammad Abdul-Rahman Odah, without any prior notice or warning.

He added that the army also demolished two sheds belonging to Mohammad Rezqallah Eqteish and Essam Mahmoud Najjar, without a prior notice or warning.

The sheds were used to store card boxes, near the Central Fruits and Vegetable Market, close to the main entrance of the town.
Army Kidnaps A Father, His Wife, And Their Five Children, In Ramallah

Israeli soldiers invaded, earlier Thursday, a Palestinian home in the al-Am’ari refugee camp, south of Ramallah, and kidnapped a father, his wife, and their five children, in addition to confiscating equipment from the family’s auto repair shop.

The soldiers then kidnapped the father, Mahran, his wife and their five children, and took them to an unknown destination.

The army also invaded the family’s car repair shop, on the ground level of the property, and confiscated several cars.

The invasion led to clashes between the soldiers and local youths who hurled stones at the military vehicles, while the soldiers fired many rubber-coated steel bullets, and gas bombs.