27 apr 2017
ICRC: Gaza on Edge of Collapse Due to Electricity Crisis

Director of the International Red Cross office in Gaza, Yves Daccord, said on Wednesday that the Gaza Strip is on edge of collapse due to severe electricity crisis.

Warning that the Palestinian hospitals in Gaza are to stop offering healthcare services, he said: “Hospitals are to stop serving children, women and men, due to the lack of electricity.”

Currently, electricity is only four hours on in the Gaza Strip, because of policies imposed by Israel, Egypt and the Palestinian Authority, according to Days of Palestine.

Speaking to Aljazeera.net, Daccord called for urgent international efforts to afford electricity to the Gaza Strip, where the lack of electricity touched the life of all residents.

He warned the sewage and drinking and running water plants are directly affected by the severe lack of electricity in Gaza.

Daccord refused to blame any party for the electricity crisis in Gaza.
Clashes erupt after settlers set fire to agricultural land in Bourin

Head of Bourin council, Raed al-Najjar, told the PIC reporter that a group of fanatic settlers of a nearby settlement outpost torched olive trees and agricultural lands east of the town.

Dozens of Israeli soldiers invaded, earlier on Wednesday at dawn, the town of Kifl Hares, west of Salfit in central West Bank, and prevented the Palestinians from using the streets, while Israeli colonists visited sites in the area.

The Maan News Agency said many army vehicles invaded the town, fire many concussion grenades before forcing all stores to shut down, and ordered the Palestinians to remain indoors.

The invasion was carried out as the soldiers were transporting dozens of colonialist settlers, who wanted to visit ancient sites in the area.

Maan added that dozens of soldiers were also deployed at the main entrance of the town, searched many Palestinian cars and examined the ID cards of the passengers.
Israeli Soldiers Confiscate 60 Tons Of Wood, Demolish Small Factory, In Jenin

They added that the soldiers also loaded approximately 60 tons of wood, owned by Mahmoud Ahmad Abu Bakr and Rafiq Sobhi Zeid, into their trucks and illegally confiscating them.
25 apr 2017
Settlers set fire to olive trees east of Bethlehem

A group of Israeli settlers burned 100 olive trees on Tuesday in Beit Ta'mir village to the east of Bethlehem city.

Representative of the Wall and Settlement Resistance Committee, Hasan Breijia, said that the settlers set fire to 100 olive trees in Palestinian lands close to an illegal settlement outpost.

Breijia pointed out that the burned trees, which are planted over an area of 5 dunums, belong to the two citizens Mubarak and Mohammed Zawahra.
Israeli officers overtax Palestinian shopkeepers in Wadi al-Jouz

A PIC news correspondent quoted eye-witnesses as stating that Israeli soldiers and cops escorted municipal crews as they broke into Palestinian shops in Wadi al-Jouz and ordered the traders to pay steep taxes.

Tension flared up as Palestinian civilians passing through the area have been subjected to abrupt searches by the Israeli cops.

The steep taxes slapped by the Israeli occupation authorities on a systematic basis make part of underway attempts to force the Palestinian shopkeepers out of Occupied Jerusalem.
Gaza: Electricity reduced to four-hour intervals

The Gaza population’s suffering from power cuts exacerbated further after Egypt’s power lines, which feed the southern district of the Gaza Strip, broke down again on Monday evening.

Now, every four hours of electricity supply will be followed by a 20-hour blackout.

Palestinian media sources said that Egypt’s power lines in the Sinai became out of service, leading to blackouts in the Egyptian border town of Sheikh Zuweid and Rafah area.

This development happened after Gaza’s sole power plant shut down its turbines on April 19, 2017 and has not resumed functioning since.

Funds donated by Qatar and Turkey, which allowed fuel supplies to be purchased from Israel for the plant for three months, have been exhausted.

Gaza’s energy authority announced it would not purchase additional supply until the Palestinian Authority granted it full exemption from excise taxes on fuel.
Israeli Soldiers Demolish Six Shops Near Ramallah

He added that the army claimed the shops “are too close to the military roadblock” installed by the soldiers, near the main entrance of the village.
24 apr 2017
Israeli measures to restrict entry of foreign tourists into West Bank

Spokesman of the Palestinian Ministry of Tourism, Jeryes Qamseyya, said that Tel Aviv sent letters to the Israeli tourism offices stipulating that foreign tourists should not be granted visas to the Palestinian territories if they are travelling to the West Bank cities, especially Bethlehem and Occupied Jerusalem.

Qamseyya affirmed in a statement to Quds Press that the restrictions imposed on foreign tourists fall in line with the Israeli ongoing targeting of the tourism sector in the Palestinian territories.

Qamseyya stressed, "The decision will not pass because Israel will not be able to promote tourism without the Palestinian holy sites," adding that most of the Israeli tourism agencies are likely to reject the new measures.

The Palestinian official pointed out that the Ramallah government did not receive any official decision about the matter, emphasizing that the Ministry of Tourism will launch an intensive campaign to counter the decision.

In an earlier interview with Quds Press, Qamseyya said that Israel steals Palestinian products from Palestinian websites and claim that they are part of the Israeli tourism.

The Palestinian tourism sector is suffering from Israeli tight measures that include imposing restrictions on the foreign tourists' movement, who usually travel on the Israeli airlines to the Palestinian territories, and restricting their movement inside the territories through the erected checkpoints and the apartheid wall which separates Jerusalem from the West Bank cities.

The Palestinian tourism is also facing difficult conditions due to the continuous blockades and incursions by the Israeli army which have escalated since the eruption of the Jerusalem Intifada in 2015 and led to decreasing the number of tourists.

Although the occupied Palestinian territories have a unique religious and historical heritage, tourism in the occupied West Bank faces many challenges that have caused a decline in the tourism sector's contribution to the GDP because of the constant Israeli pressures.
23 apr 2017
IOF notifies Palestinian facilities with stop-work orders

The Israeli occupation forces (IOF) raided on Sunday a number of Palestinian villages in Masafer Yatta area, south of al-Khalil city, and handed stop-work notices against a number of agricultural facilities.

Coordinator of the Anti-Settlement National Committee, Rateb al-Jabour, said that an IOF force, accompanied by officials from the so-called the Organization and Construction Committee, stormed a number of villages to the east of Masafer Yatta and attacked Palestinian farmers.

Jabour said in a statement to Quds Press that the IOF handed two Palestinian farmers stop-work notices under the pretext that their agricultural barracks were built without a license in Area C, which is completely controlled by Israel according to the Oslo Agreement.

The Palestinian activist pointed out that the IOF soldiers have detained since the morning a number of vehicles owned by Palestinian workers who were interrogated without a clear justification before arresting one of them.

He added that the IOF also detained a vehicle carrying a number of female employees of the Ministry of Education before releasing them after several hours of detention.
21 apr 2017
Lives of patients at risk due to power crisis in Gaza

The Arab Doctors Union - Palestine Branch warned on Friday of serious consequences in the health situation in the Gaza Strip due to the current electricity and fuel crisis.

The Union said in a statement that if the current crisis continues, serious repercussions will ensue in the health condition of hundreds of patients in the various hospital departments with only 4 hours of electricity a day instead of the 8-hour schedule in which power is supplied and cut in 8-hour intervals.

The Union affirmed that the Gaza Strip has entered a new phase starting from 15th April 2017 as a result of the current electricity and fuel crisis, which will cause deterioration in the health services of hospitals and health centers needed by more than two million people in the besieged coastal enclave.

It warned that the current crisis threatens the lives of 100 children in nurseries, 113 intensive care patients and 620 kidney failure patients including 29 children. 11 maternity rooms and 40 operation rooms are at the risk of being closed.

It added that the continuation of the fuel crisis will lead to ruining 500 blood units and affect hundreds of sensitive drugs, laboratory materials and vaccinations stored in refrigerators as well as the emergency departments in hospitals.

The Arab Doctors Union appealed to the international organizations and concerned parties to intervene urgently and immediately to provide the Gaza hospitals with the needed quantities of fuel to run generators.
Israeli Soldiers Abduct Two Palestinians, Invade Two Gas Stations, In Hebron 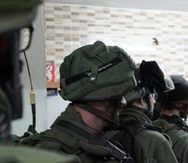 It is worth mentioning that the soldiers, and police officers, invaded a blacksmith shop in Hebron city, and confiscated six machines.
19 apr 2017
Israeli forces destroy Palestinian farm in Occupied Jerusalem

The Israeli forces on Wednesday morning destroyed a Palestinian farm in al-Issawiya town, in Occupied Jerusalem.

According to a PIC reporter, Israeli bulldozers, escorted by military vehicles, rolled into the area and demolished a ranch belonging to the Palestinian farmer Murad Ziad Mustafa.

The demolition was reportedly carried out under the pretext of unlicensed construction.

Prior to the demolition, a tough cordon was imposed by the Israeli police around the area.
17 apr 2017
Israeli forces seize Palestinian agricultural equipment

The Israeli occupation forces (IOF) on Monday morning seized an agricultural tractor from Palestinian ranches east of Tamoun town, in the northern West Bank, in the third such violation over recent days.

A PIC news correspondent quoted local sources as stating that the Israeli soldiers continue to crack down on Palestinian farmers in al-Ras al-Ahmar area, east of Tamoun town, in the northern Jordan Valley, as part of a larger scheme of ethnic cleansing aiming to force Palestinians out of the area.

According to the same sources, the Israeli army has often seized tractors and water tanks from the area.

Turbines producing electricity in the Gaza power plant have stopped working completely after their fuel supplies ran out, the Palestinian Energy and Natural Resources Authority announced on Sunday morning.

The energy authority blamed the Palestinian government in Ramallah for the electricity problem in Gaza and appealed to it to refrain from levying taxes on diesel fuel that powers the plant.

It expressed its readiness to purchase tax-free fuel supplies for the power plant.

The plant’s renewed shutdown means that Gaza's roughly two million people will have to rely on about 143 megawatts of electricity supplied by Israel and Egypt.

Such development could leave Gazans with four hours or less per day of electrical power and would aggravate the ongoing shortage of drinkable water. Under normal circumstances, they get power on alternating cycles of eight-hours.

The plant's closure could also affect the work of the Gaza desalination plant, which produces clean and potable water. Some 96 percent of Gazan water is undrinkable.

In fact, Gaza’s power needs are about 450 to 500 megawatts per day, but it often gets less than half of that.

All the plant's fuel, purchased in January with funding from Qatar and Turkey, contributed to keeping it operational alternately for only three months.
Jewish settlers attack Burin town, set fire to olive fields

Violent clashes broke out on Saturday evening between local residents and extremist Jewish settlers after the latter set fire to olive fields in Burin village, south of Nablus in the occupied West Bank.

A local source reported that the settlers tried to enter the village after they lit its nearby fields, prompting residents to use loudspeakers to call for repelling the attack and putting out the fires.