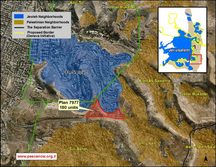 Israeli authorities plan to build a new settlement in Sur Baher for Israeli police and military.

Using bulldozers, cranes and armed police, Israeli authorities uprooted at least 60 olive trees in the East Jerusalem neighborhood of Sur Baher on April 23, 2018. Signs reading, “no trespassing” were left in their place.

According to settlement watch group Peace Now, Israeli authorities announced plans in 2012 to build a settlement consisting of 180 units in Sur Baher for members of the Israeli military and police. Israeli authorities had originally expropriated the land in 1970, but for “public use” – a designation that typically sets the stage for building Israeli national parks on stolen Palestinian land, rather than residential settlements.

Ahmad Nimr, one of the affected landowners, told the Palestinian Information Center that the land and trees belong to the Nimr, Dweiyat, Awad and Amira families. He adds that many of the 500 olive trees on the land are over 100 years old.

Until Monday, Israeli authorities had largely ignored the olive grove and the four families continued to cultivate it. The Israeli Supreme Court ruled against their objections to the settlement plan in 2014.

Haaretz reports that the stolen trees will be replanted in an Israeli national park in Jerusalem. The Jerusalem municipality is well known for classifying Palestinian areas as so-called national parks to wrest control over more territory.

Amalya Dubrovsky is the editor of aicnews.org.
25 apr 2018
Israel to build new settlement in Occupied Jerusalem

Israeli forces started two days ago preparation works for the construction of a new settlement neighborhood over a Palestinian land in Sour Baher town east of Occupied Jerusalem, according to Haaretz Hebrew newspaper.

The newspaper revealed that the neighborhood is going to be built over a Palestinian land that was confiscated in 1970s, and that it will be allocated for the Israeli demobilized soldiers.

Israeli forces also started uprooting olive trees, that were planted by Palestinians in the area, as they are planning to establish 180 settlement units in the first stage of the project.
Army Uproots Hundreds Of Trees, Fruit And Vegetables Plants, In Northern Plains

Resident Hasan Sawafta said he received a military order for uprooting his trees and plants, four years ago, under the pretext that his lands are “state-owned” in the occupied West Bank.

He added that the army informed him his lands are “designated for military usage,” therefore, are off-limits to the Palestinians. He files appeals against the destruction of his land, but were all denied.

Sawafta said the army intends to bulldoze and uproot around 35 Dunams, and added that the destruction was started after ten army jeeps, large vehicles and bulldozers invaded the area.
23 apr 2018
Israeli bulldozers raze land, uproot trees in Occupied Jerusalem

Israeli bulldozers Monday razed lands belonging to residents from the village of Sur Baher, to the southeast of Occupied Jerusalem, in spite of ongoing legal battle between its Palestinian owners and Israeli authorities, according to one of the landowners.

According to Quds Press, Ahmad Nimr, a landowner, said that bulldozers uprooted olive trees planted on 56 dunums, of farming land, adding that the trees and land belong to four Palestinian families and that the land has been planted for over 100 years with 500 olive trees, which Palestinian landowners cultivate and harvest every year.

He said landowners tried to explain to the Israeli forces who sealed off the area before the bulldozers proceeded to destroy the land and uproot the trees that there was a legal case regarding the land in Israeli courts that has not been settled yet and that there is a court order barring any work on the land for two months until a decision is made regarding its future.

In 1972, Israeli authorities decided to seize this land. The owners objected to the decision, showing land deeds proving their ownership of the land. The judge, in 1984, banned construction on the land but allowed owners to use it for farming purposes.

Israel announced its intention to build a settlement on the land 2010. The settlement was supposed to include 160 housing units exclusively for retired Israeli police and military members.
22 apr 2018
Palestinian café in Jerusalem reduced to rubble by Israeli bulldozers

Israeli bulldozers razed on Sunday a café near the Qalandiya military checkpoint, set up to the north of Occupied Jerusalem.

According to local sources, a café located near the main entrance to Jerusalem’s Qalandiya refugee camp was reduced to rubble by Israeli bulldozers.

The demolition is another chain in a series of similar moves carried out by the Israeli military in an attempt to expand the Israeli-controlled Qalandiya checkpoint and tighten closures in the area.

sraeli forces early Sunday morning partially demolished a print shop in the village of Beit Anan, to the northwest of Occupied Jerusalem, and seized laptops and printing machines.

Rajaee Hamid, the owner of the shop, said that Israeli forces knocked down the external walls of the building at 06:00 a.m. before raiding it and confiscating printers and computers estimated at thousands of dollars.

He added that the Israeli army handed him a military order to shut down the print shop and suspend services as of Sunday, April 22.
20 apr 2018
Israeli police seize stalls, release tickets against worshipers

Israeli municipality teams escorted by policemen attacked and confiscated many of Palestinian commercial stalls in the Old City of Occupied Jerusalem. The police also issued tickets against the owners.

Other fines were released against Muslim worshipers who parked their cars in the city to perform Friday prayer at al-Aqsa Mosque.

Home demolition orders were as well handed over to Palestinian residents of Wad Yasoul neighborhood in Silwan town near Occupied Jerusalem. Summonses for referring to the municipality were also handed out.

Israeli forces seized a banner from a group of Turkish worshipers while passing through al-Silsilah gate into al-Aqsa Mosque.

About 50,000 Palestinians performed Friday prayer in al-Aqsa Mosque in spite of Israeli tightened security measures which are imposed at the pretext of Jewish holidays.
Israeli Colonists Cut 100 Olive Trees Near Nablus

A group of extremist Israeli colonists uprooted, Friday, at least 100 olive trees from an Orchard in Burin village, south of the northern West Bank city of Nablus.

The assailants, who came from a nearby illegal colony, invaded an orchard owned by Mohammad Raja, and cut 100 trees; many of them were planted more than 60 years ago, in addition to cutting several almond trees.

The attacked land is the only source of livelihood to Mohammad and his family.

Yahia Qadous, the head of Burin Village Council, said the colonizers also wrote racist graffiti, including “Death To Arabs”, on big rocks in the orchard.

He added that the attack is part of numerous similar violations targeting many orchards, homes and property in the village.
18 apr 2018
Israeli occupation threatens demolition of Palestinian facilities

Israeli forces on Wednesday issued demolition notices for structures and tents to the south of al-Khalil province, in the occupied West Bank.

Jabour said at least four demolition notifications were handed over to Palestinians from the Hawamda and Daghameen families.

Meanwhile, Israeli settlers attacked farmers and shepherds in Yatta and forced them out of their land under gunpoint.
Israeli Colonizers Cut Trees, Write Racist Graffiti, Near Nablus

Several Israeli colonizers, living in Yitzhar illegal colony which was built on Palestinian lands, south of the northern West Bank city of Nablus, wrote racist graffiti and cuts many olive and almond trees in Orif village.

He stated that the colonizers cut at least 10 olive trees, 10 almond trees and three grapevines.

Shehada stated that the villagers, their homes and lands have been subject to escalating assaults and violations, especially since the village is just 200 meters away from the illegal colony.
Israeli Soldiers Abduct A Guard Of Al-Aqsa Mosque 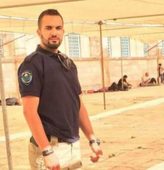 Israeli soldiers abducted, earlier Wednesday, a Palestinian guard of the Al-Aqsa Mosque in occupied Jerusalem and summoned four others for interrogation.

Media sources in Jerusalem said the soldiers abducted the guard, identified as Arafat Najeeb, while trying to enter the holy site through Hotta Gate.

They added that the soldiers also summoned four other guards for interrogation in the al-Qashla police station near Hebron Gate, in the Old City.

They have been identified as Hamza Nibali, Luay Abu Sa’ad, Khalil Tarhouni and Fadi ‘Oleyyan.

A group of Israeli settlers forced on Tuesday a number of Palestinian farmers to leave their agricultural land in Madama town to the south of Nablus, northern West Bank.

Eyewitnesses reported that more than 20 settlers stormed the town under the protection of Israeli army and attacked local farmers while working in their farms.

During the settlers’ attack, Israeli forces fired heavy teargas bombs at the farmers and prevented them from ploughing their land.

An upwards of some 700,000 Israeli settlers reside in occupied Palestinian territory in violation of international law. The international community has repeatedly called their presence and rising population the main impediment to potential peace in the region.
16 apr 2018
Army Abducts Eight Palestinians, Injures Four, In Nablus And Jenin

Israeli soldiers abducted, on Monday at dawn, eight Palestinians, and injured four others, during military invasions of Nablus and Jenin, in the northern parts of the occupied West Bank.

They added that the soldiers also invaded many stores along Nazareth Road, north of Jenin, violently searched them and confiscated surveillance recordings.

The soldiers also invaded the Shuhada Junction, in the center of Nablus city, and shot five Palestinian protesters, after firing rubber-coated steel bullets and gas bombs at them.

Medical sources in Nablus said local medics provided the wounded Palestinians with the needed treatment without moving any of them to hospitals or clinics.

During the invasion, the soldiers stormed and searched homes in the Old City of Nablus, and abducted a young man, identified as Ahmad ‘Amira.

The Arab leaders participating in the 29th Arab League summit held in the Saudi city of Dhahran on Sunday confirmed the Arab identity of East Jerusalem, the capital of the state of Palestine.

In the concluding statement of the summit, named "Jerusalem Summit", the Arab leaders stressed the right of Palestine to sovereignty over all territories occupied since 1967 including East Jerusalem.

They called for peace as a strategic option and a way to resolve the Arab-Israeli conflict in accordance with the Arab peace initiative launched by Saudi Arabia in 2002.

They also expressed their rejection of the US decision to recognize Jerusalem as Israel's capital and move the US embassy in Israel to the holy city. They announced the decision "null" and "void" and a "grave breach of international law".

The summit pledged $100 million per month to support Palestine in light of the pressure and the financial crisis it is going through.

Earlier on Sunday, the 29th Arab League summit kicked off under the name "Jerusalem Summit, and it was attended by 14 Arab leaders.