A group of Israeli settlers on Friday destroyed 30 Palestinian-owned olive trees in al-Sawiya village, south of Nablus, in the northern West Bank.

Daghlas pointed out that Israeli settlers in the West Bank have recently stepped up their attacks on Palestinian citizens and their property, which are usually carried out under the protection of Israeli soldiers.
Israeli settler grazes sheep on cultivated Palestinian land

An Israeli settler, escorted by soldiers, grazed on Friday his sheep on a Palestinian land tract near the Zaatara military checkpoint, south of Nablus, resulting in heavy damage.

Eye-witnesses said crops were damaged after an Israeli settler forced his way into a cultivated Palestinian land and grazed his sheep.

Israeli authorities, on Wednesday, decided to seize about 100 dunams (24.7 acres) of agricultural land belonging to the Palestinian village of al-Khader, south of Bethlehem, said a local activist.

Hassan Breijah, Coordinator of Anti-Wall and Settlement Committee, said that the so-called Israeli Civil Administration has approved the seizure of 100 dunams of agricultural land in Ein al-Qassis from western al-Khader and their reallocation for settlement construction.

He explained, according to WAFA, that the purpose is to build new settler units to expand the illegal Israeli settlement of Neve Daniel, which is built on the villagers’ lands.

Israel has also approved the construction of 650 new settler units for the illegal settlement of Beit El, close to the central West Bank city of Ramallah.

Between 500,000 and 600,000 Israelis live in Jewish-only settlements across occupied East Jerusalem and the West Bank, in violation of international law.

All settlements across the West Bank are illegal under international law, particularly article 49 of the Fourth Geneva Convention, which establishes that the occupying power shall not deport or transfer parts of its own civilian population into the territory it occupies.

The “Civil Administration” is the name Israel gives to the body administering its military occupation of the West Bank.
20 aug 2018
Life-saving services in blockaded Gaza taking last breath, warns UN

“Life-saving services in the Gaza Strip rely heavily on donor-funded emergency fuel,” McGoldrick said. “We have now run out of funds and are delivering the final supplies in the next few days. Without funds to enable ongoing deliveries, service providers will be forced to suspend, or heavily reduce, operations from early September, with potentially grave consequences.”

Those facilities had been on the verge of shutting down as Israel had halted the flow of gas and fuel into Gaza through the Kerem Abu Salem crossing from August 1 to August 14.

Among those in danger are 4,800 Palestinians in intensive care units. Medical services for the rest of the population will be reduced or stopped altogether.

“If donors intervene quickly, we can prevent a serious deterioration, such as a disease outbreak or other public health concern,” said McGoldrick. “But we need funding immediately to avoid the collapse of critical life-saving services.”

Gaza subsists on only four or five hours of electricity a day, so essential services rely heavily on back-up generators which run on fuel.

Lack of water and sanitation facilities could also contribute to the outbreak of disease in the densely-populated enclave.

McGoldrick’s warning followed a number of other pleas the UN has made this summer for funding, particularly in light of the US decision to drastically reduce its funding to the United Nations Relief and Works Agency for Palestine Refugees (UNRWA).
VIDEO: Palestinian Farmers Assaulted in East Jerusalem
It is noteworthy, that farmers in Jerusalem are subjected to such assaults on a daily basis, preventing them from selling their crops in the street. In addition, the proceeds of selling these crops support dozens of needy or less fortunate Palestinian families in various neighborhoods.

The assault on farmers and vendors in occupied East Jerusalem coincides with preparations for the Muslim holiday of Eid al-Adha.
IOF notifies demolition of Palestinian market on Eid eve

Local sources told the PIC reporter that the IOF raided the market while it was crowded with Palestinian citizens shopping for Eid al-Adha which starts Tuesday.

They added that 10 shops have been notified with demolition so far, all of which owned by Palestinian merchants from Barta'a, Jenin and Nablus.

Eastern Barta'a is isolated on the Israeli side of the Apartheid Wall and it has a large market frequented by Palestinians of the 1948 occupied territories.
19 aug 2018
Israeli settlers raze Palestinian lands in Ramallah village

Local sources reported that scores of Israeli settlers in the early morning hours of Sunday brought bulldozers to Ras Karkar and started to level Palestinian lands in the area.

Anti-settlement activist Ayed Mazloum said that the bulldozed lands are owned by the families of Nofal, Abu Fkheida, and Samhan who have not received any official order to confiscate their lands.

Quoting Mazloum, Quds Press said that the razing operation was halted after the residents of Ras Karkar rallied to resist the settler attack.

The Palestinian activist added that in case a confiscation order is issued against the lands, Ras Karkar residents will not stand idly by, pointing out that the families of Ras Karkar and the neighboring villages have already started to march in the targeted lands to support their owners.
‘Farmer Terrorism’ Is the New Slogan for Jewish Settlers

In less than three months, Jewish settlers have destroyed over 2,000 trees and grapevines in the occupied West Bank. Rights group B’Tselem has issued a detailed report on this destruction, including testimony from Palestinian farmers. Bales of hay and barley fields were also destroyed. The destruction wrought by Israel’s settler-colonists equates Palestinian agriculture to terrorism; slogans sprayed on Palestinian property following the destruction included “No to farmer terrorism”.

The personal testimonies show that Israel has once again refused to act in order to deter settler violence against Palestinians and their land. Ultimately, the aim is to displace Palestinians forcibly by terrorizing those seeking access to their own land. “This process has erected invisible walls throughout the West Bank, which Palestinians know crossing will expose them to violence and even danger to their lives,” says B’Tselem.

Israel is using complementary forms of violence: direct destruction by targeting crops and using the same destruction to levy a psychological threat against the colonized population. In the documented cases, the destruction was so severe that new plants have to be cultivated, thus having a negative impact on the sliver of economic independence that Palestinians can gain from agriculture.

There is an outcome of resilience mingled with imposed resignation; the farmers will still tend to their fields yet the threat of another round of settler violence fuelled by impunity is always imminent. No matter how well rights organizations document the violations, though, the Palestinians have no recourse other than awareness. This is partly because Israel has moved ahead in terms of normalizing colonial expansion.

Hassan ‘Issa discovered that 168 out of 250 grapevines in his fields had been destroyed by settlers. “What happened to my vines feels like a terrible injustice, and I feel incredibly frustrated and sad.” It is painful to read this. Compare the vagueness of ‘Issa’s statement — made in the knowledge that there are no rights for the colonized in apartheid Israel — with the threat left by the settlers: “No to farmer terrorism.”

The value of people and land is misplaced to set the accelerated pace for forced displacement and a re-enactment of the image of Palestine being barren, one of the false premises behind Palestine’s colonization by Israel. The only difference is that Israel now prefers sustained acts of violence that are documented and discussed almost routinely.

“Farmer terrorism” is, of course, a complete falsehood, yet it is on such premises that expansion has been facilitated. The more that Israel utilizes such absurd claims, the further it is removed from reprimand by the international community. This lends Israel ample time and space — and total immunity — to construct its variety of “terror” narratives to make such purported threats endemic to its settler-colonial presence. Why would anyone even seek to challenge the notion of “farmer terrorism”? At first glance, it is void of any logic; a second reading flaunts its depravity, embodied by state and settlers alike.

Palestinian resilience has always laid bare the Zionist myths. Having no other means to sustain itself, Israel is eager to create the conditions for myths to become a manifested reality, even if it means acknowledging Palestinian existence through accusations which serve to embellish its purported “security concerns”. Nothing, though, justifies the wanton destruction of crops by illegal Jewish settlers or anyone else.

The WAFA Palestinian News Agency said the Israeli assailants invaded lands, owned by Khaled Samhan, in the northern part of the village, and uprooted 70 olive saplings. Many of the saplings had been planted in barrels, which were overturned by the paramilitary colonizers. video

WAFA added that the attackers also cut many trees on his lands, and wrote racist graffiti on the large cement cover of an underground water reservoir.

On Saturday at dawn, another group of illegal colonizers cut dozens of Palestinian olive trees, owned by a local resident identified as Nathmi Dheidi, in ‘Arraba town, south of Jenin, in the northern part of the occupied West Bank.
18 aug 2018
Israeli forces shoot at Palestinian fishermen off Gaza

Local sources said that Israeli forces targeted the Palestinian boats off Beit Lahia region in the northern part of the enclave.

No initial injuries or arrests were reported during the armed attack.
Illegal Colonizers Cut Dozens Of Olive Trees Near Jenin 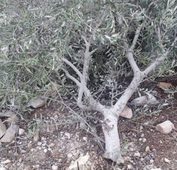 A group of illegal Israeli colonizers cut, on Saturday at dawn, dozens of Palestinian olive trees in ‘Arraba town, south of Jenin, in the northern part of the occupied West Bank.

Media sources said the assailants invaded an orchard, owned by a local resident identified as Nathmi Dheidi, near the illegal Dothan colony, which was built on Palestinian lands.

They added that the colonizers cut dozens of olive trees, which were planted approximately four years ago.

Nathmi said that attack was not the first, as the colonists previously targeted his land, and several other orchards and farmlands in the area.

A horde of extremist Jewish settlers on Thursday evening set fire to a Palestinian-owned bulldozer on a road in southern Nablus in the occupied West Bank.

According to a local official, settlers from the illegal settlement of Yitzhar set ablaze a bulldozer belonging to Ali Issa on a road between the towns of Urif and Asira al-Qibliya in Nablus.

The same gang of settlers also hurled stones at Palestinian cars as they were traveling on the Nablus-Qalqilya road.

Ghassan Daghlas, who monitors Israeli settlement activity in the northern West Bank, said that settlers from the illegal settlement of Eli broke into Wadi Ali area and chopped down 200 olive trees belonging to Nael Ewesat, a villager from Al-Lubban Ash-Sharqiya.

This came as settlers torched a bulldozer passing nearby Yitzhar settlement and hurled stones and glass bottles at Palestinian vehicles travelling along Nablus-Tulkarem Road, damaging some 40 vehicles.

The attacks came after an Israeli settler was killed by a Palestinian driver in a car accident, initially suspected as a hit-and-run attack late Thursday night.

Settler violence against Palestinians and their property is routine in the West Bank and is rarely prosecuted by Israeli authorities.

It includes property and mosque arsons, stone-throwing, uprooting of crops and olive trees, attacks on vulnerable homes, among others.

Between 500,000 and 600,000 Israelis live in Jewish-only settlements across occupied East Jerusalem and the West Bank in violation of international law.