Federica Mogherini, the European Union's High Representative for Foreign Affairs and Security Policy, announced on Wednesday that the EU will examine new Palestinian textbooks for content that “incites hate and violence,” out of concern that EU aid funds are being used to promote hatred.

Hebrew-language news outlets reported that the announcement followed after an investigation and campaign by IMPACT-se (Institute for Monitoring Peace and Cultural Tolerance in School Education).

IMPACT-se allegedly found that the new Palestinian textbooks, released in September 2018, are even more radical than previous editions, with hundreds of examples of extremism encouraging violence, demonization, and incitement against Israel. Video

The hateful content was found to be methodical and appeared in all subjects including mathematics, physics, biology, etc.

The results of IMPACT-se's investigation were shown to senior European officials and delegates at the EU Parliament.

Mogherini confirmed that the that the EU will carry out an academic study of Palestinian educational materials and that funds were allocated for that purpose in the 2019 budget.

The scrutiny is to be conducted by an independent, internationally respected research institution.

Mogherini said, “The purpose of the investigation is to "identify possible incitement to hate and violence and non-compliance with UNESCO standards regarding peace and tolerance in education."

She added, "Incitement to violence is incompatible with the promotion of the two-state solution, and greatly exacerbates the lack of trust between the communities."
9 may 2019
A Personal Account of Detention, Racism and Broken Rules
In the past week, 2 children have been abducted and illegally detained by soldiers, in Salaymeh. Both of them were 14 years old, from Jerusalem, and were visiting their cousin in Al-Khalil. The children were dragged from school, frisked, forced on their knees and handcuffed by the soldiers. One of them was let go after 2 hours, while the other was taken to a military base, where he was interrogated without his lawyer or parents present.

An international activist who was documenting this incident was also detained by the soldiers, she describes her detention as follows:

“I’ve been at Salaymeh checkpoint every other day for a month and a half, just trying to document the soldier’s harassment of the children, keeping in contact with the UN, so they can hopefully help if children are arrested. I am always mindful not to antagonize the soldiers and try to interact with them as little as possible. My hope is that an international presence will result in less violence, because the soldiers will know they are being watched and may be held accountable.

“On the day that I was detained, I was filming a soldier as normal, who threatened to arrest another activist who I was with. Because I’d witnessed a lot of broken rules and violence by the army, during my time at Salaymeh checkpoint, I knew it was important to keep filming. The commander asked me to move away, and, when I kept filming, she told me that she would have another soldier move me with force.

When I didn’t stop filming, she told me to come with her and that she had the authority to make arrests. I was very unsure of what to do in this situation – I had been told before that soldiers could not make arrests, but I was confused, and I was afraid of what might happen so I complied and went with her. I later found out that what the commander had said was, in fact, a lie and that she had absolutely no legal authority to detain me.

“I was kept at Salaymeh checkpoint for an hour and a half, being told that the police would come, but they never did. I was then put into a military van without being told where I was being taken. They then drove me around the city, back and forth, for half an hour, which was very confusing.

I still don’t know why they did this but I believe now that they were trying to shake off the UN who were trying to find out where I was being held, in order to assist me. Eventually, I was taken to a military base where they were also holding the Palestinian child who had been arrested. We were both held there for over 5 hours.

During this time, I was marshaled around, sporadically questioned, never given any food or water and never having anything explained to me. I was told that I would never be able to return to the country and that I would be deported that day. The whole time, I was denied access to my lawyer and I was never given any reason for why I was being held.

“What struck me the most about being detained with the Palestinian child was that, as an international, I was treated far better. I, an adult, was not handcuffed, and I was allowed to keep my things. He however, a child, was handcuffed, restrained, frisked, and they took his phone and his things.

It was shocking and angering, to me, that this child was treated so much worse than me – it made it very obvious to me that the treatment of Palestinians undoubtedly has its roots in racism.”
7 may 2019
13 Gazan schools severely damaged in Israeli escalation

Thirteen Palestinian schools in the besieged Gaza Strip were severely damaged in the Israeli escalation across the Strip, which claimed the lives of 27 Palestinians and injured at least 154 others, on Tuesday.

The Palestinian Ministry of Education in Gaza said in a statement that the windows and doors of 13 schools were completely damaged, as well as the walls cracked.

The ministry also said that the shrapnel of the Israeli missiles and debris of the targeted buildings directly hit the classrooms.

The ministry expressed its “strong condemnation” regarding the Israeli escalation on Gaza, which damaged basic infrastructure in all fields, and stressed that this is a violation of the international laws and conventions.

The ministry called for the international community to halt Israeli practices and hold Israel accountable for its violations.
5 may 2019
Dozens of Israeli settlers raid, damage Urif high school

Ghassan Daghlas, an official who monitors settlement activity in the northern West Bank, told Ma'an that Israeli settlers from the illegal settlement of Yitzhar, raided the high school by throwing rocks towards it and breaking the windows of several classrooms.

Daghlas also confirmed that the raid caused moderate material damages to the school.

The Urif high school has been a target of a number of attacks carried out by both Israeli forces and settlers, forcing the staff to shut down the school eight times in the previous semester and six times in the current semester.

Both UNICEF and UNESCO confirmed in an official UN statement that "From January to December 2018, the UN documented 111 interference's to education in the West Bank affecting 19,196 children, an average of more than two violations every week."

The statement added, “During military escalations from November 11th to 13th, schools in the besieged Gaza Strip and in southern Israel were closed for at least one day, including four schools in Gaza that received minor damage, and one learning support centre and one kindergarten that both severely damaged."
21 apr 2019
Students and teachers suffer from tear gas in Israeli attack on school

Dozens of Palestinian students and teachers on Sunday morning suffered from their exposure to tear gas fumes after Israeli soldiers attacked their school in the southern area of al-Khalil city in the occupied West Bank.

Sources from the administration of al-Khalil elementary school said that Israeli soldiers showered students and teachers with tear gas grenades as they were entering the school in the morning. video

They said that many students and teachers received on-site medical assistance after they suffered from their exposure to tear gas. 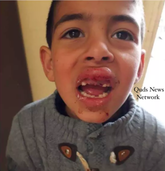 An illegal colonist ran over a Palestinian child in Hebron, in the southern part of the occupied West Bank, Tuesday, and  fled the scene, according to Quds News.

The unidentified colonist struck Omar Ra’fat Salaymah, 6 years old, with his car while the child was on his way home from school in the Salaymah neighborhood.

Palestinian medics promptly transported the child to a medical center in Hebron; his wounds have been described as a moderate.

Such attacks are on the rise, and nowhere is this more evident than in Hebron, where Benjamin Netanyahu cancelled the long standing agreement with the Temporary International Presence in Hebron (TIPH), and forced them out.

On 31 March, 1994, representatives of the Palestinian Liberation Organization and the Israeli government signed an agreement requesting Italy, Denmark and Norway to provide observers to form a Temporary International Presence in the City of Hebron (TIPH).

Article 49 of the 4th Geneva Convention states that the occupying state (Israel) is forbidden to transfer its own population onto the land it occupies (Palestine), therefore under international law, all Israeli settlements are illegal.
16 apr 2019
Soldiers Injure Many Palestinians, Including Schoolchildren, In Hebron 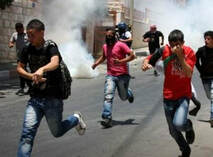 Israeli soldiers invaded, Tuesday, many Palestinians, including schoolchildren, in and around two schools in Hebron city, in the southern part of the occupied West Bank.

They added that the soldiers attacked many Palestinians, protesting the invasion, and fired a barrage of gas bombs, concussion grenades and rubber-coated steel bullets at them.

Media sources said dozens of schoolchildren, and Palestinians in the surrounding areas, suffered the severe effects of teargas inhalation.
Page:  6 - 5 - 4 - 3 - 2 - 1
Powered by