Over 900 dunums of Palestinian lands have been burned to a crisp due to wildfires that broke out in Occupied Jerusalem afternoon on Thursday.

The raging fires burst out across hundreds of dunums on the mountains of Jerusalem’s village of Staf, home to thousands of fruitful trees planted decades ago.

30 Israeli firefighter crews rushed to the area to extinguish the fire after they closed off the main access roads to the village. The firefighters have remained on the alert for fear that the mountains burst into flames again.
26 oct 2017
Al-Khalil: Young men ward off attacks by settlers and soldiers

A horde of Jewish settlers from Kiryat Arba settlement on Wednesday night attacked Palestinian homes and tried to set fire to a Mosque in al-Khalil city under military protection.

Local sources told the Palestinian Information Center (PIC) that a large number of settlers escorted by soldiers stormed the neighborhoods of Jabal Johar, al-Kassara, al-Harika, and Wadi al-Hasin, attacked homes and Palestinian citizens, and tried to carry out an arson attack on the Khaled Ibn al-Walid Mosque.

They added that local young men from the neighborhoods clashed with the settlers and soldiers, and defended the Mosque and their homes.

During the events, soldiers fired volleys of tear gas grenades at the angry young men and their homes, causing many of them to suffer from inhaling their fumes.

Citizens, including seven children, also suffered from inhaling tear gas as they were inside their homes. The children were rushed to a local hospital while others received on-site medical assistance.

A PIC reporter said that the clashes broke out before midnight and continued into an early morning hour on Thursday.

Later, an Israeli military force closed the area of clashes and set up makeshift checkpoints near Tareq Ibn Ziyad School and Khaled Ibn al-Walid Mosque in an attempt to arrest the young men who confronted the settlers and soldiers in al-Khalil overnight events.
16 oct 2017
Extremists Attempt to Burn Hebron Mosque

Local sources reported, according to Al Ray, that residents of nearby Ma’on settlement stormed,  at dawn, the village mosque and tried to burn it before Palestinian residents discovered them.

They added that Israeli forces interfered and protected the setters by throwing gas, and sound bombs towards the residents.
1 oct 2017
Soldiers Injure Many Palestinians, Cause Fire In Two Homes, And Abduct A Woman Near Bethlehem

Several Israeli army jeeps invaded, earlier on Sunday morning, the town of Doha, west of the West Bank city of Bethlehem, searched many homes and injured many Palestinians before abducting one woman, and caused fires in two homes.

The invasion was carried out by a large military force before the soldiers initiated violent searches of many homes after breaking into them, especially near a mosque, in the center of the town.

Medical sources said many Palestinians were injured by live Israeli army fire following clashes that took place in the center of the town.

The soldiers also abducted several Palestinians during the home invasions and violent searches; one of them is a woman, identified as Amal Abdullah Sa’adi, 52.

Also, a fire, resulting from the Israeli concussion grenades, burnt various sections of a home, owned by Mohammad Khalil Soubani, before Palestinian firefighters rushed to extinguish it.

Furthermore, the soldiers surrounded another home, inhabited by members of Sa’ad family, and invaded it before collecting medication and their containers, and detonated them in the property, causing fires and extensive damage. Palestinian firefighters managed to contain the fire, but after it caused serious damage.

It is worth mentioning that the soldiers have abducted at least six Palestinians from their homes, in different parts of the West Bank.

An Israeli court sentenced Yinon Reuveni, 22 to eight years imprisonment for the arson targeting the Church of Loaves and Fishes near Tiberias two years ago.

His lawyer said that he intends to appeal the sentence, and claimed that the proof of Yinon’s involvement was insufficient. The lawyer also accused the court that convicted him of making mistakes and ignoring evidence presented by the defense.

Yinon was arrested and charged with arson in July of this year, while another Israeli extremist was acquitted of all charges in the burning of the church.

The church was burned in June of 2015 in a blatant act of anti-Christian aggression. In addition to the fire, which destroyed several church buildings, the perpetrators painted anti-Arab and anti-Christian graffiti on walls throughout the church grounds.

The Catholic Church recently celebrated the reopening of the church, earlier this year.

The fire, which was set in the middle of the night in June of 2015, wounded two church members and completely destroyed one of the buildings on the site.

Hebrew graffiti was found on another building within the complex, reading ‘Idols will be cast out’ or destroyed, AFP correspondents reported at the time. The text is part of a common Jewish prayer.

The church only recently reopened, two years after the arson attack. The damage cost over a million dollars to repair, and the Israeli government in September 2015 rejected a claim for compensation by officials of the Catholic Church.

Reuveni, the only person to be convicted in the arson attack – despite evidence that multiple people were involved – is also a suspect in a number of other hate crimes against Christians and Muslims living in the Holy Land.

One of the crimes he is suspected of participating in is an arson in February 2015 against the Dormition Abbey in Jerusalem.

A third suspect, Moshe Orbach, was arrested in late 2015, accused of inciting violence against Christians and other non-Jews living in the Holy Land for writing and publishing tracts detailing the “necessity” of attacking non-Jews, and laying out the practical steps on how to carry out the attacks.

Bentzi Gopstein, the right-wing Israeli leader of the extremist group Lehava, in 2016 reiterated the call for Jewish extremists to torch churches in the Holy Land.
25 sept 2017
Children among 20 Palestinians kidnapped by Israeli forces

The occupation forces further stormed al-Duheisheh refugee camp, south of Bethlehem, and closed al-Tariq bookshop, in the second such move in recent months.

The Israeli soldiers ransacked Palestinian homes in the camp and cracked down on civilians before they showered the area with live rounds and teargas canisters.

Dozens of civilians, among them children, choked on teargas. A Palestinian young man was shot and injured with live ammunition in his leg and was transferred to a local hospital. Wildfires also broke out near a civilian home in the assault.

At the same time, dozens of Israeli soldiers broke into Qalqilya, in the northern West Bank, and kidnapped seven Palestinians after they rummaged into civilian homes.

The list of arrestees included the Palestinian children Karam Noufel, 15, and Omar Saleem.

In the meantime, a number of Palestinians sustained gas and bullet injuries in clashes that burst out shortly after the IOF raided a female students dormitory in Tulkarem.

Medics at Thabet Thabet Hospital said a number of protesters have been treated for breathing disorders and rubber-bullet injuries inflicted by the assault.

The sweep culminated in the abduction of 16-year-old Mohamed al-Badawi from the al-Arroub refugee camp, north of al-Khalil, and the Palestinian citizen Fahmi Badr from his home west of Ramallah in an attempt to force his son, Mus’ab, to turn himself in.
24 sept 2017
Israeli settlers burn down Palestinian olive trees south of Nablus

Israeli settlers on Sunday burned dozens of olive trees in Kafr Kalil, south of Nablus, as preparations for olive-picking got underway in the occupied territories.

According to eye-witnesses, Israeli settlers from the nearby Brakha outpost torched olive trees planted on Palestinian land near Hawara checkpoint.

The Palestinian locals were shocked as they caught sight of dozens of olive trees reduced to ashes.
17 aug 2017
Israeli army blows up house of Palestinian martyr near Ramallah

The Israeli occupation army at dawn Thursday detonated a house belonging to a Palestinian family near Ramallah city as part of the mass punishment policy pursued against relatives of Palestinian attackers.

According to local sources, Israeli troops stormed Deir Abu Mash'al village and forced families to evacuate neighboring homes before they embarked on planting explosives inside the house of martyr Adel Ankoush and then blasting it.

The explosion inside the house caused a fire in a nearby home and material damage to others.

Last Thursday, an Israeli military force had demolished two houses belonging to families of martyrs in the same village and sealed up the house of Ankoush for later demolition.

Martyr Adel Ankoush along with two other young men from the village carried out, on June 16, a shooting and stabbing attack in Occupied Jerusalem. One policewoman was killed and others were injured in the attack.
16 aug 2017
IOF demolishes two industrial facilities in Jenin

Representative of coal workshops in Ya'bad, Kayed Abu Baker, said that an Israeli force accompanied by bulldozers broke into the area and confiscated several tons of wood used for manufacturing charcoal.

In an interview with Quds Press, Abu Baker added that the Israeli bulldozers swept away huge amounts of coal that were still under manufacturing causing a fire in the neighboring lands.

Abu Baker explained that Palestinian coal-production workshops are targeted at the request of Israeli settlers in the nearby settlements who claim that these workshops pollute the environment and cause health problems.

He pointed to the existence of similar coal plants in the 1948 occupied Palestinian territories near the Israeli population centers yet no complaints are raised against them.

He noted that there are more than 30 coal-production workshops in the area which are repeatedly targeted by the IOF and which represent the main source of income for more than 1,000 Palestinian families living in Ya’bad and the surrounding villages.

The Palestinian unionist affirmed that the demolition on Wednesday took place without a prior warning, adding that owners of coal-production facilities in the area had previously filed complaints to human rights organizations and courts about the Israeli targeting of their facilities without reaching any positive result.

He continued that they will keep in contact with the concerned authorities to take the necessary legal steps against these violations.
8 aug 2017
Settlers torch agricultural lands south of Nablus

Yousef Deiriyeh, member of the anti-settlement committee in the town, told Quds Press that extremist settlers of Itamar settlement arrived in groups and set fire to lands planted with citrus trees in Ain al-Douweh and Ain al-Jehir areas to the east of the town.

Palestinian firefighting teams could not approach the affected areas as Israeli Occupation Forces (IOF) were deployed in the site along with the attacking settlers.

Jewish settlers every now and then carry out similar attacks against the town and its inhabitants under the protection of IOF soldiers.
3 july 2017
Army Injures One Palestinian Near Ramallah, Cause Fire To Farmlands And A Car 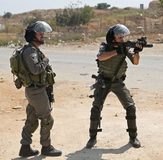 Israeli soldiers shot and injured, on Sunday evening, a Palestinian man after the army invaded al-Mogheer village, northeast of Ramallah, and fired many gas bombs and concussion grenades, causing fires in a car and three dunams of farmlands.

Medical sources said one Palestinian was shot with a live Israeli bullet, before he was rushed to a hospital in Ramallah, while many residents suffered the severe effects of teargas inhalation.

Furthermore, at least three dunams of farmland, and a car owned by a Palestinian identified as Osama Abu Alia, were burnt due to the dozens of gas bombs and concussion grenades that were fired by the invading soldiers.
Page:  3 - 2 - 1
Powered by