Palestine Advocacy Project, an NGO based in the Boston area, has launched a series of ads portraying prominent Israeli officials, such as Prime Minister Benjamin Netanyahu, and their disregard for the safety and well-being of Palestinians.

“If you do your own research, you’ll quickly find many more hateful quotes,” said Palestine Advocacy Project member Maggie Liu. “As a college student living on a politically-active campus, I know firsthand how little young people know about the reality of the situation. I hope these ads will bring some much-needed dialogue to campuses across the country.”

According to the PNN, nine universities across the United States, including Harvard, Boston University, Cornell, and University of California-Berkeley are publishing these ads in their newspapers. The ads quote a number of Israeli officials, such as Israeli deputy defense minister Rabbi Eli Ben Dahan, who asserted that Palestinians “are beasts, they are not human.” The ads all include a link to a webpage, (www.pal-ad.org/quotes) with additional quotes from Israeli leaders.

“It is beyond disturbing that someone in a position of power can say these things and not even flinch,” noted Farida El Hefni, a University of Rochester student. “How are these politicians that are so quick to accuse people of being anti-Israel or anti-Semitic the same ones using racist language to describe an entire group of people?”

Palestine Advocacy Project created these ads in order to spark conversation among young Americans on university campuses across the United States. The ads present a side of the Israeli-Palestinian conflict that is seldom featured in the American mainstream media. The indisputable, direct quotes from prominent Israeli officials are provocative, and in many cases, explicitly racist.

Palestine Advocacy Project has spent the past two years exposing the hypocrisy surrounding the U.S.’s relationship with Israel, and challenging negative stereotypes of Palestinians.

The “One Word” campaign, which was released in 2014, showcased the many forms of violence Palestinians are subjected to on a daily basis.

More recently, PalAd brought the works of Palestinian Poet Laureate Mahmoud Darwish to public spaces. This latest campaign, which focuses on the violent rhetoric of the upper echelons of Israeli political leadership, will give the American public new information on why the oppression of Palestinians continues.

“The sooner people realize that this isn’t just about conflict over land and that there are people literally calling for the erasure of Palestinians,” continues El Hefni, “the sooner we can get somewhere.” 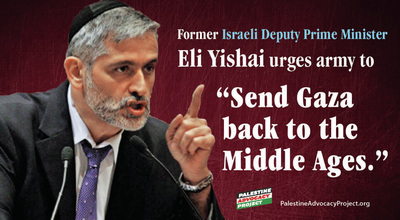 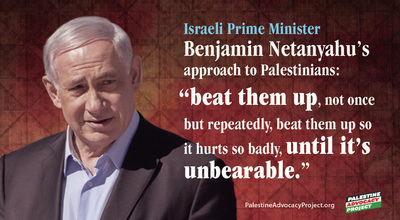 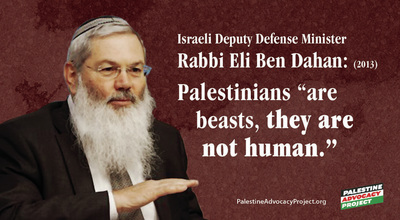 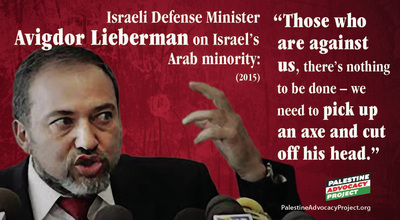 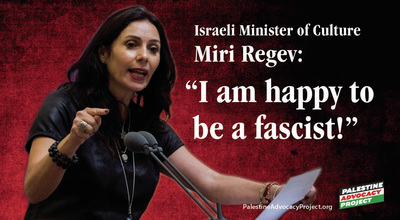 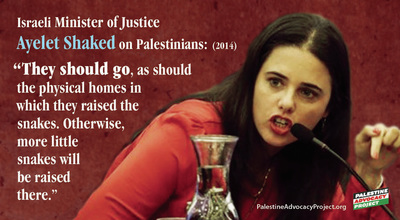 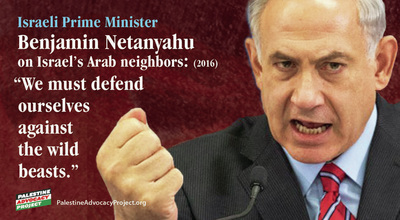 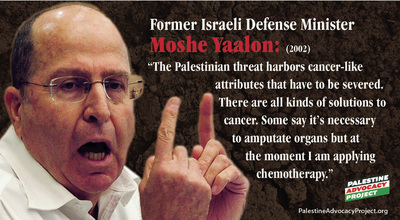 Palestine Advocacy Project has taken notable quotations from Israel's US-backed political leaders and displayed them in prominent media outlets across the U.S. Scroll through them below. Isn't it about time America's leaders started connecting the dots and holding Israel's leaders accountable?

While most Americans were horrified when Trump proposed banning all Muslims from entering the U.S. and repeatedly urged his supporters to beat up protesters, the Prime Minister of Israel says that the way to deal with Palestinians is to “beat them up, not once but repeatedly, beat them up so it hurts so badly, until it’s unbearable. ” Israel's Minister of Education says “I’ve killed lots of Arabs in my life – and there’s no problem with that.” Donald Trump believes in "taking out [terrorists'] families." Meanwhile, Israel's Minister of Justice calls for murdering all Palestinians on her Facebook page: “[Palestinians] are all enemy combatants, and their blood shall be on all their heads; now this also includes the mothers of the martyrs, who send them to hell with flowers and kisses.”

We think enough is enough. Join our fight to change the discussion about Israel and Palestine in the United States.

Member of Hamas’s political bureau Ezzat al-Resheq has strongly denounced Facebook for disabling Palestinian pages, describing its measure as a “serious violation of professional ethics that entail its respect for the freedom of expression.”

In press remarks on Thursday, Resheq stressed that Israel with its brutal war machine had failed over long years of occupation to suppress the Palestinian people’s voice and prevent them from resisting and defending their rights.

“Any force complicit with the occupation will not succeed in silencing the Palestinian voice on social networking websites and no one will be able to prevent the Palestinian people from expressing their natural right to liberate their land and holy sites, and exposing the occupation crimes against stones, humans and trees,” Resheq said.

The Hamas official urged the Palestinian, Arab and Islamic media outlets and social media activists to condemn and confront this unjust and arbitrary campaign launched by Facebook against Palestinian institutions and figures.

Facebook had already blocked and restricted many pages belonging to Palestinian activists and institutions within the context of a deal with the Israeli government to prevent incitement against Israel.
13 oct 2016
Facebook suspends accounts of PIC staff members

Facebook Administration has suspended the accounts of eight staff members of the Palestinian Information Center (PIC).

PIC extends its apologies to Facebook followers for such a temporary suspension of posts due to censorship by Facebook admin.

PIC page on Facebook is followed by 200,000 Facebookers, who have been seeking for up-to-date pieces of news on the Palestinian-Israeli conflict and the Middle East.

The move comes a few weeks after Facebook administration struck a deal with Israel to remove anti-occupation pages and accounts.

Earlier, Euro-Mediterranean Observatory for Human Rights expressed deep concern over the recent agreement signed by the Israeli government and Facebook administration to restrict freedom of expression.

During the 33rd session of Human Rights Center, the Euro-Mediterranean expressed concern over the new Facebook administration’s restrictions on freedom of expression based on racial discrimination.

The Israeli magistrate court of Jerusalem released seven Palestinians on Tuesday evening and extended the detention of another, according to the Palestinian Prisoners Society (PPS).

Lawyer for PPS Mufid al-Hajj said in a statement that Ibrahim Suleiman Sanduqa, Mutaz Suleiman Sanduqa, Ramzi Muhammad al-Jubeh, Muhammad Hani Mahlus, and Mustafa Imad Eweis were released on the condition of paying a fine of 500 shekels and upon depositing a bail of 5,000 shekels.

Samer Abu Qadus and Sharif Taha were also released on the condition of paying a 1,000 shekels fine and depositing a bail of 5,000 shekels.

Meanwhile, the detention of Nawras Abu Ghazaleh was extended until next Friday. He was detained after posting “our time has come” on Facebook, amid an increasing crackdown by Israel on Palestinian activists, journalists, and civilians for alleged “incitement” on social media.

Earlier Tuesday, Israeli authorities have released other Jerusalemites on conditions of banning them from the city or the Al-Aqsa Mosque, putting them on house arrest, and paying fines and bails.

Dozens of Jerusalemites have been arrested over the past two days during Israeli raid and arrest campaigns throughout the occupied city.
10 oct 2016
MK Glick posts diatribe against judge who ruled against him, for terrorist in past

The same judge who ordered Glick away from the Temple Mount approved the Ammunition-Hill shooter's postponement of his prison sentence; Glick bears a grudge, saying 'I don't forgive you.'

MK Rabbi Yehuda Glick (Likud) posted a condemnatory message on his Facebook page addressed to Jerusalem District Judge Hagit Mak-Kalmanovitch, who approved the application to delay the prison sentence of the Arab Israeli terrorist who carried out the shooting attack in Jerusalem on Monday.

Rather than immediately address the issue of the terrorist's actions on Ammunition Hill yesterday, Glick began by reminding the judge that it was she who had given the order in the past that kept Glick off the Temple Mount, noting the possibility that he pose a danger to public order. One week later, Glick was shot in Jerusalem.

Referring to the Jewish tradition of forgiving one's neighbor before the Day of Judgment on Tuesday night, Glick wrote, "On the eve of Yom Kippur 5777, I don't forgive you. The blood of the dead is on your hands.

I will never forget that Wednesday, 10/22/14, when I stood before you begging for my life. Trying to claim with all my strength that the accusation was baseless. You preferred to believe terrorists and their helpers, the Muslims in the Israel Police."

He continued (with the missing punctuation appearing thus in the original), "I gave you a polygraph test, and you said that I wasn't acting according to criminal procedure. I yelled before you do you prefer the truth or 'criminal procedure'?

"You preferred terrorists over me, and you decided to bar me from the Temple Mount because as you said it, 'There's a fear of danger from me'

"I accepted the distorted and false claim, even though time after time I was attacked at the temple Mount, and I never raised a finger or a bad word against anyone, you preferred to believe violent people, terrorists, scoundrels, liars. I felt that you were assassinating me!!"

"Needless to say that in the end it was proven beyond any doubt that I was as pure and clean as snow."

The above, edited-down tirade in Hebrew took up the vast majority of Glick's post before he moved on to Mak-Kalmanovitch's influence on recent events: "You didn't listen to my please, but to the pleas of that terrorist who was arrested so many times for violence you did listen.

"You were cruel to the merciful and merciful to the cruel.

"The blood of the two killed yesterday is spread on your hands."

The 39-year-old terrorist was supposed to serve four months in prison for attacking a police officer. A hearing had been set for April, but the defendant did not appear in court. His lawyer explained that this was because he had begun a new job, and Mak-Kalmanovitch pushed the hearing back by a month and a half to May 30.

On that date, the terrorist was sentenced to four months' imprisonment, and he applied to have the start of that sentence delayed until October.

Contacted by Ynet about his Facebook post, Glick responded, "I think that the post speaks for itself. When I saw her name, it brought me back in a flashback to a day when I felt like Dreyfus," the French army captain who was convicted in what is today seen as a scandalous display of anti-Semitism, "helpless against injustice in the name of the law."
4 oct 2016
Israel: More efforts needed to quell anti-occupation activism on FB

Erdan said more efforts have to be done in order for Israel to be able to quell Palestinians’ right to the freedom of speech and anti-occupation resistance on social media networks.

A few days earlier, Facebook extended an apology over the closure of Palestinian news sites. According to Palestinian activists, the censorship is a direct upshot of a recent meeting between Facebook administrators and Israeli leaders.

The minister referred to the surge in “anti-Israel campaigns” via social media networks, particularly on Facebook.

Over one million Israeli fanatics are expected to pop in the occupied Palestinian territories to mark the Jewish Passover, Erdan added as he called for more efforts to suppress resistance campaigns and activities.

He said the Israeli police and intelligence are sparing no effort to keep an eye on anti-occupation campaigns and posts across social media networks. He hailed the Facebook administration for “meeting Israel’s needs” whenever called for help.

Several Palestinian youths have been arrested by the Israeli occupation forces since October 1 last year and sentenced to prison-terms on account of anti-occupation statements posted online.
1 oct 2016
PMF calls for cancelling Facebook-Israel agreement

The forum said that the agreement supports Israel’s daily war crimes against Palestinians, calling on pro-Palestine activists to interact and follow the removed Palestinian Facebook pages in response to this unprecedented campaign.

In a controversial move, the Israeli government and Facebook reportedly agreed to work together to determine how to tackle “incitement” on social media, aimed primarily at Palestinians.

Not long after Facebook's agreement, several Palestinian pages with millions of followers found themselves closed and administrators locked out, in a move believed to be directly connected to the agreement between Facebook and the Israeli government.