Israeli Occupation Forces (IOF) handed out on Wednesday an order to stop the construction of four housing tents and stockyards in al-Hadidiya area in the northern Jordan Valley.

The Israeli Occupation Forces (IOF) delivered Thursday evening a stop-work order in the village of Idhna in the southern occupied West Bank district of al-Khalil.

Local sources told PIC reporter that Israeli authorities delivered the notice to Sharif al-Jiawi for a one-story home in the al-Ras area of western Idhna in which six family members are currently residing.
5 apr 2017
IOA orders to stop construction of water well on Palestinian land

The Israeli occupation authorities (IOA) on Tuesday evening ordered a Palestinian citizen to stop the underway construction of a water well in eastern Bethlehem province.

The cease-construction notification was issued on account that the area falls under the Israel-run category.
30 mar 2017
Long-awaited Maintenance Work Offers Rare Sight for Palestinians in al-Khalil

The alley in occupied al-Khalil (Hebron), open for less than a day, gave Palestinians the rare opportunity to see Shuhada Street and the illegal settlements which have caused countless closures for the civilian Palestinian population.

Palestinians have been pursuing permission, from the Israeli side, to do this maintenance work for years – with no success.

The market in the Old Town runs almost parallel to Shuhada Street, where the main settlements in the heart of Hebron are located, and where Palestinians are totally prohibited.

As one of the lowest points in the Old City, this area of the “souq” is regularly flooded in winter by rain water and overflowing sewage, as much of the sewage system has been cut off by the illegal settlements.

Despite a one-day ‘permit’ granted by Israeli forces, for work to be undertaken, several delays were caused when Israeli forces would not allow additional maintenance vehicles to enter the area.

Furthermore, the small amount of time granted by the permit only allowed workers to fix a short stretch of sewage pipe immediately beneath the concrete slabs, with other vital works having to be postponed.

Heavily armed Israeli forces were present on site at all times to ‘guard’ the path to what was once a thriving Palestinian market and the main route between north and south al-Khalil. After the Ibrahimi Mosque massacre in 1994 – in which colonial settler Baruch Goldstein gunned down and killed 29 Palestinians and injured more than 120 more when he opened fire with his machine gun during prayers – Israeli forces have slowly but steadily eradicated the Palestinian presence in Shuhada Street. This process has been achieved through broader, ever-increasing restrictions, harassment, and intimidation towards the Palestinian civil population of al-Khalil.

During the maintenance, passing Palestinians could be seen reacting with surprise and stopping to watch the work and take photographs. Sunlight – long hidden by the high cement slabs barricading the street – suddenly flooded the souq from the small archway. For many Palestinians, this brief opening served as a reminder of a time before the severe crackdown on Palestinian human rights by Israeli forces in the aftermath of the  massacre. One elderly man demanded the soldiers let him through so he may visit his shop, which remains sealed-up on Shuhada Street, where Palestinian movement is entirely forbidden by Israeli forces, to favor and facilitate settler movement.
28 mar 2017
IOF blocks Agriculture Ministry from building road in Salfit

Israeli Occupation Forces (IOF) on Monday banned Palestinian Agriculture Ministry teams from building an agricultural road north of Salfit city in the West Bank for being close to Ariel settlement.

Director of Agriculture Department in Salfit governorate Ibrahim Al-Hamad revealed that the ministry has been working for two years on a project aimed at building agricultural roads in the Israeli-controlled areas classified as Area C as well as areas close to the Separation Wall and settlements, according to WAFA news agency.

Hamad pointed out that the IOF had previously banned the ministry from building a road between Deir Ballout and Kafr al-Deek towns in Salfit.

Salfit governorate has been targeted by an Israeli large-scale settlement activity for the expansion of 25 illegal settlements established on Palestinians' land.
Israeli Soldiers Demolish Two Homes In Jerusalem 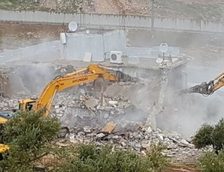 Israeli soldiers demolished, on Tuesday at dawn, two Palestinian homes, without a prior warning, in the al-‘Eesawiyya town, in occupied Jerusalem, reportedly for being built without construction permits.

Several Israeli police and military vehicles, accompanied by bulldozers, invaded the town, before the soldiers demolished a home, belonging to Ahmad Abu al-Hummus and his family.

The 150 square/meter home was recently construction, and the family was preparing to move into it after concluding all needed work.

The soldiers also demolished an under-construction home, belonging to members of Mheisin family, in al-‘Eesawiyya.

Mohammad Abu al-Hummus, a member of the Follow-Up Committee in the town, said the family built the property one year ago, but stopped the construction of the second floor, under a direct order from the City Council.

Since then, the family has been preparing and filing all needed applications, but the army went ahead and demolished the building without a prior warning.
13 mar 2017
Owners of destroyed facilities in Gaza fed up with donors' promises

The owners of the economic facilities that were destroyed in the 2014 war against the Gaza Strip expressed their anger and protest on Monday at the donor countries' procrastination in providing the dues that were endorsed in the Gaza Reconstruction Conference held in Cairo in October 2014.

Hamza al-Masri, the spokesman of the gathering of the owners of destroyed facilities, said in a sit-in staged in front of the United Nations office in Gaza that 30 months have passed after they were promised to be compensated but nothing has been fulfilled.

Masri complained, "We came to say enough with false promises. We are no longer able to withstand further losses."

He pointed out that more than 6,000 economic facilities were destroyed during the war leaving nearly 40,000 workers jobless.

He affirmed that the owners of the destroyed facilities are experiencing hardships as a result of the pressure imposed on them by banks and courts because of the mounting debts.

The owners of the destroyed economic facilities asked the president of the Palestinian Authority, Mahmoud Abbas, to immediately intervene to solve this problem and provide the dues promised.

They called on the Palestinian Minister of Economy, Abeer Ouda, to earnestly address their problem and start effective and real steps on the ground to compensate them. They appealed to the Arab League, the Gulf Cooperation Council and the Arab donors to give a helping hand and contribute to the reconstruction of their economic facilities.
﻿9 mar 2017﻿
Gaza Water Reservoir Operating Again with Help from Germany

Thanks to a 9-million euro fund from the German government, the Muntar water reservoir in Gaza, destroyed by Israel during its summer 2014 military onslaught, is once again operating.

Work on rebuilding the 5000-cubic meter reservoir, considered vital for Gaza’s water supply, started in October 2014, according to WAFA.

The fund also went to rehabilitating a destroyed water well in the area, in addition to another water reservoir, pumping stations and water lines and roads leading to the site.

Beerwerth said that Germany continues to support development in the West Bank and Gaza Strip.

While rebuilding Muntar water reservoir is one of these projects financed by Germany, it is also working on a 65- million euro project to build a waste water treatment plant in central Gaza.

2016 saw a marked increase in the number of homes Israeli authorities demolished throughout the West Bank, including East Jerusalem, citing lack of building permits as a pretext. The scale of demolitions documented by B’Tselem this year is the most extensive since we began systematically documenting demolitions in 2004.

In August 2015, Israeli authorities waged an unprecedented demolition campaign across the West Bank, destroying some 100 structures, half of them residential, which were home to over 200 people, including roughly 100 minors. The wave of demolitions, considered at the time as unusually extensive, was unofficially halted in late 2015 due to the Jewish and Muslim holidays. Authorities resumed the demolitions in early 2016.

As the months went by, what had seemed in late 2015 as exceptionally extensive demolitions became the norm and part of official Israeli policy throughout Area C.

As part of this policy, in 2016, Israel demolished 274 homes in the West Bank (excluding East Jerusalem), thereby rendering homeless 1,134 individuals, including 591 minors. The extent of devastation Israel wreaked in 2016 outstripped the number of homes it demolished in 2014 and 2015 combined.

Demolition operations by the Israeli authorities focused primarily on three major regions: The South Hebron Hills, the Maale Adumim area and the Jordan Valley. Efforts to drive dozens of small shepherding and farming communities out of Area C are particularly palpable in these areas. In the Maale Aumim area, which includes land that Israel refers to as Area E1, authorities demolished 49 dwellings; 224 people, including 115 minors, were rendered homeless.

Israeli authorities continued their discriminatory policies against East Jerusalem’s Palestinian residents as part of an overall policy designed to cause Palestinians to leave the city. Their actions are also part of efforts to achieve a demographic and geographic reality that would frustrate any future attempt to question Israeli sovereignty in East Jerusalem.

To sum up, despite the differences between Area C and East Jerusalem in terms of which authorities operate in each area and the laws applied by Israel, the policy Israel pursues in the two areas is similar, and designed to minimize the number of Palestinians in as much land as possible. Authorities cynically cite illegal construction as a pretext for the demolitions, while at the same time authorities are the ones that prohibit legal construction by Palestinians. They avoid promoting or approving development and construction plans for Palestinians and then say they cannot issue building permits because there are no plans.

This number not only falls far short of meeting the needs of the population, inquiries by Bimkom revealed that the Civil Administration neglected to mention that virtually all the permits (35 permits) were issued at its own request for lots in the al-Jabal West site, where the Civil Administration plans to forcibly move Bedouin communities currently living east of Maale Adumim. This means the number of construction permits in Area C issued in response to applications by Palestinians is practically non-existent.

Israel pursues this demolition policy while willfully ignoring the reality it creates for Palestinian residents, treating this reality as if state authorities bear no responsibility for it having come about. With no avenue available to them to build legally, Palestinians are left with no choice but to build their homes without permits, and then live in constant fear of losing them and their sources of livelihood to demolition.

The state is forcing tens of thousands of people to live in inhuman conditions, without basic living conditions and with no hope or possibility of bettering their situation. This policy, implemented on the ground for years, is unlawful and immoral. It constitutes the forcible transfer of protected Palestinian residents within the occupied territory, whether directly, through the demolition of their homes, or indirectly, through the creation of impossible living conditions.

This policy, which all authorities work to uphold, severely and directly violates the most fundamental human rights of tens of thousands of Palestinians, and indirectly those of hundreds of thousands more. At the same time, the policy also offers decisive evidence that Israel has long-term plans to continue controlling the area, while oppressing and dispossessing its residents.
Page:  3 - 2 - 1
Powered by