40 UK towns and cities saw actions across the week, from Brighton to Bristol, Liverpool to Lewisham, Edinburgh to East London, Cardiff to Chester, and many places in between.

During the International Week of Action on Hewlitt-Packard, it was revealed that the world’s largest security firm, G4S, had agreed to relinquish most of its Israeli business deals. After years of campaigning, BDS activists are celebrating a victory against a company whose complicity in Israel’s crimes against the Palestinian people is coming to an end.

The unprecedented scale of the International Week of Action on HP, and the success of the campaign against G4S would not have been possible without people, all around the world, coming together to challenge corporate complicity in Israel’s occupation.

The Palestinian News Network (PNN) thanks its audience for standing in solidarity with Palestinians.

From the BDS National Committee:

Marking the 10-December UN Human Rights Day which, this year, raises the slogan, “Stand up for someone’s rights today,” about 200 legal scholars and practicing lawyers from 15 European states have issued a statement that stands for Palestinian rights and considers the Boycott, Divestment and Sanctions (BDS) movement for Palestinian freedom, justice and equality as “a lawful exercise of freedom of expression.”

While not taking a position for or against BDS, the European legal scholars’ statement defended the right to pursue Palestinian rights under international law through BDS measures against Israel. It said:

“States that outlaw BDS are undermining this basic human right and threatening the credibility of human rights by exempting a particular state from the advocacy of peaceful measures designed to achieve its compliance with international law.”

Robert Kolb, who served as a legal expert with the Swiss Foreign Ministry, commented:

“The right of citizens to advocate for BDS is part and parcel of the fundamental freedoms protected by the International Convention on Civil and Political Rights.”

John Dugard, who served at the International Court of Justice, stated:

“No government ever attempted to outlaw or criminalize the Anti-Apartheid Movement for advocating boycott, disinvestment or sanctions to compel South Africa to abandon its racist policies.  BDS should be seen as a similar movement and treated accordingly.”

Eric David, former legal counsel of the Council of Europe and the Belgian government, explained why civil society has increasingly supported BDS against Israel saying:

“It is in response to [the] irresponsible passivity of States that civil society created the BDS movement. Repression of BDS, therefore, comes as support of Israel’s violations of international law, and of the failure of States to perform their commitment made in 2005 to ‘strictly respect the aims and principles of the Charter of the United Nations.’”

“This is a defining moment in the struggle against Israel’s patently repressive legal war on the BDS movement for Palestinian rights. Leading European jurists have now confirmed that advocating and campaigning for Palestinian rights under international law is a legally-guaranteed right for Europeans and indeed all citizens of the world. Israel’s desperate attempts to outlaw the BDS movement and to legally bully its supporters into silence threatens democratic space, the jurists said in their critical statement.”

“By joining Israel’s anti-democratic war of repression on BDS, the governments of France and the UK have become more isolated than ever. In addition to this definitive endorsement by European legal scholars for the right to BDS, the European Union, as well as the governments of Sweden, Netherlands and Ireland, along with hundreds of European political parties, trade unions and civil society organizations, have unequivocally stated their support for the right of citizens to engage in boycotts against the Israeli state.”

“The BDS movement has grown tremendously across Europe in recent years, mainly spurred by popular outrage at Israel’s impunity in entrenching its decades-long regime of occupation, settler-colonialism and apartheid against the indigenous Palestinian people.”

“This momentous statement by European jurists not only vindicates BDS human rights defenders who have insisted that BDS is protected free speech. It will undoubtedly add a crucial layer of legal protection for European BDS networks and citizens in their efforts to end European complicity in Israel’s regime of oppression, especially in military trade and research, banking, and corporate involvement in Israel’s violations of international law.”
7 dec 2016
G4S ends Israel illegal businesses

The world’s largest security company, G4S, announced Tuesday evening that it is selling most of its Israeli business after an effective campaign against the company, waged by the Palestinian-led, global Boycott, Divestment and Sanctions (BDS) movement.

“Our globally coordinated campaign has had a real impact,” said Rafeef Ziadah of the BDS movement in a statement issued following the news.

“We will continue campaigning until G4S ends all involvement in violations of Palestinian human rights,” Ziadah added.

G4S, the world’s largest security firm, provides services at Israeli military checkpoints along Israel’s wall annexing Palestinian land in the occupied West Bank and inside settlements built in violation of the international law.

It also helps run prisons where Palestinians are tortured, abused and detained without charge.

The statement pointed out that the international Stop G4S Campaign has cost the company contracts worth millions of dollars in Europe, the Arab world, South Africa and elsewhere.

In March, G4S announced its plans to “exit a number of businesses” including G4S Israel, US “youth justice services”, and UK “children’s services.” 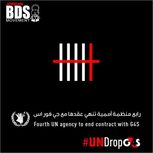 The WFP in Jordan had contracts with G4S worth more than $900,000 in 2015, but WFP has instead hired a local security service provider and joined three other UN agencies in Jordan – UNHCR, UNICEF and UNOPS – in distancing themselves from a company that is deeply complicit in human rights abuses.

The #UNDropG4S campaign has been urging UN agencies globally to end their relationship with G4S. To that end, Jordan BDS has been an integral part of the global campaign and organised several actions locally.

A delegation from Jordan BDS had met with WFP representatives at their offices in Amman on Palestinian Prisoners’ Day this year presenting the case against G4S. In September, a month before the expiry of G4S’ contract with the WFP, Jordanian NGOs wrote an open letter to UN agencies in Jordan calling upon them to drop their contracts with the firm due to its complicity in human rights violations.

Kefah Adnan, member of the Jordan BDS movement, reacted to this victory:

“We welcome WFP’s decision as a step in the right direction. UN agencies must stand on the right side of history and honour their commitment to human rights. Our campaign will continue until UN Women and UNDP, the only two remaining UN agencies with G4S contracts, follow suit.”

Last week, G4S announced that it is selling £88m worth of its investment in its Israel subsidiary. That would consist selling most of its Israeli business, after an effective campaign against the company, waged by the Palestinian-led, global Boycott, Divestment and Sanctions (BDS) movement for Palestinian rights.

“We salute the efforts of BDS activists in Jordan and across the Arab World against occupation and mass incarceration profiteer G4S. The campaign against G4S in the region is intensifying from Kuwait to Lebanon to Morocco, and we shall not stop until G4S completely and fully withdraws from its remaining contracts with the Police Academy and the settlements.”

“The BDS movement is also committed to supporting campaigns by other justice movements against G4S for its role in the racist private prison and immigrant detention systems in various countries.”
WCC Activist Denied Entrance to Occupied Palestine

Israeli authorities, on Tuesday, prevented Dr. Isabel Perry from entering into the occupied Palestinian territories (oPt), claiming she is an activist of the World Council of Churches, which supports the boycott movement against Israel.

Local media said, according to Al Ray, that it is the first time the Israeli occupation prevented a tourist because of activity in the boycott movement.

The Interior Minister of Israel, Arye Deri, and the Minister of the Public Security and Strategic Affairs, Gilad Erdan, were responsible for making the decision of blocking Perry’s entry.

Dr. Isabel Perry, a citizen from Malawi and an expert in religious affairs, arrived at Ben Gurion Airport on Monday.

A bill preventing supporters of the Boycott, Divestment, and Sanctions (BDS) movement from entering Israel was authorized in early November, for its first reading in the Knesset.

Deri considers approval of Perry’s request to enter the oPt to be encouragement for activities which  are in opposition to Israel’s policies.
4 dec 2016
BDS: 2016 witnessed Israeli failure to silence the movement

The year 2016 will be remembered by Palestinians and supporters of the Palestinian issue as the year of Israel’s spectacular failure in fighting the Boycott, Divestment, and Sanctions (BDS) movement.

According to BDS, in 2016, Israel allocated massive financial assets, well-oiled propaganda, and cyber sabotage against the movement.

Throughout this year, BDS has grown stronger and stronger. Major multinationals, including Orange and CRH, abandoned their involvement in Israeli projects that infringe on Palestinian rights. In Spain, tens of city councils announced themselves "Israeli Apartheid Free Zones".

BDS led both UNICEF in Jordan and Kuwait's Public Institution for Social Security to end contracts with the American G4S, which supports the Israeli occupation.

The campaign succeeded in convincing hundreds of academics in Brazil and Italy to join the academic boycott of Israel. It also reached the Oscars, calling on nominees to forgo Israeli propaganda trip.