The Israeli occupation police on Friday morning arrested a pro-Palestine Dutch lawmaker as he was trying to enter the Aqsa Mosque.

According to Euro-Mediterranean Human Rights Monitor, Dutch MP Tunahan Kuzu (Muslim) was carrying a Palestinian flag when he was denied entry to the Aqsa Mosque and arrested by Israeli police officers video

Kuzu tried to visit Aqsa to express his solidarity with the Palestinian people. He is an outspoken critic of Israel’s practices against the Palestinians.

In 2016, Kuzu refused to shake hands with Israeli premier Benjamin Netanyahu during his visit to the Netherlands.
18 mar 2019
3 killed, several injured in Holland shooting attack 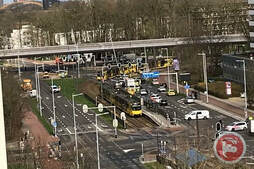 Three people were shot dead and five others were injured, on Monday, after a gunman opened heavy fire in a tram, in Utrecht City, in the Netherlands.

According to local police, the gunman fled the scene and a wide-scale manhunt is being conducted across the Utrecht province.

Sources also reported that heavily armed police are gathered in front of a house, near the 24 Oktoberplein Junction, where the shooting attack was carried out, with reports that the police are preparing to launch a raid.

The Dutch paramilitary police increased security at airports and other vital infrastructure points.

In addition, all mosques in Utrecht were evacuated and security was increased at mosques across the Netherlands.

The Utrecht University was also ordered to lockdown all buildings and trains are not allowed to run through Utrecht Central station.

The Utrecht police have arrested a 37-year-old Turkish-born suspect, identified as Gokmen Tanis.

The Dutch Justice Minister, Ferd Grapperhaus, said the suspect had a criminal record and that it was too early to say whether he had a terror motive.

Tensions are high following a recent terror attack in New Zealand, in which the Australian gunman shot and killed over 50 people, including six Palestinians, in two mosques in Christchurch City.
10 feb 2019
Netherlands recognize Gaza, West Bank as official Palestinian birthplaces

Palestinians living in the Netherlands will be allowed to register the Gaza Strip and the West Bank as their official place of birth, Dutch State Secretary Raymond Knops told the House of Representatives in The Hague.

The Netherlands, which does not recognize Palestine as a sovereign state, currently offers Palestinians two options when specifying their birthplace at the Dutch civil registry, the two options are Israel or “unknown.”

Knops wrote a letter to the House of Representatives, saying that he intends to add the Gaza Strip and the West Bank, including East Jerusalem to a list of official states used by the Dutch civil registry.

The new category will be available to Palestinians born after May 15th 1948, the day the British Mandate was officially terminated and Israel became a recognized state.

In the letter, Knops stated that the new category is in accordance with “the Dutch viewpoint that Israel has no sovereignty over these areas,” as well as the Netherlands' refusal to recognize Palestine as a state.

Knops added that the new category was named based on the Oslo Accords and United Nations Security Council resolutions.

While the UN General Assembly and at least 136 countries have recognized Palestine as a sovereign state, most of the European Union has refrained from recognition until such status is established peace agreement between the Israelis and the Palestinians.