Rateb al-Jbour, coordinator of a local popular committee in Hebron area, reported that Israeli forces demolished a greenhouse and uprooted olive trees after razing one dunam of land.

Around 3,000 Israeli settlers live in illegal Jewish-only settlements in the Yatta region, according to the Applied Research Institute Jerusalem.

The South Hebron Hills, known locally as Masafer Yatta, lie almost entirely in Area C, the 62 percent of the West Bank under full Israeli civil and security control since the 1993 Oslo Accords.

Masafer Yatta residents were expelled at the time of the establishment of a firing zone in the 1970s and were eventually allowed back following a long court battle, but are under the constant threat of being expelled or seeing their homes demolished.
Gaza economy's losses exceed $300 million in 2018

Head of the Popular Committee Against the Siege on Gaza, MP Jamal al-Khudari, on Sunday said that 2018 was the worst since the Israeli occupation of the enclave in 1967.

Al-Khudari said in a press statement that the economic and humanitarian situation in the Gaza Strip is unprecedentedly deteriorating, with direct and indirect economic losses exceeding $300 million in 2018.

Al-Khudari explained that 2018 was the most disastrous in Gaza in view of the 13-year-long Israeli blockade and the never-ending suffering resulting from three devastating military aggressions on the besieged territory.

Hundreds of Palestinian families are still suffering as their homes, which were destroyed during the 2014 aggression, have not been reconstructed yet, he noted.

Israel has imposed a ban on the entry of hundreds of kinds of goods and raw materials needed for industry into the Gaza Strip. About 90% of Gaza factories have been gravely affected, leaving nearly 300,000 workers unemployed.

According to the Palestinian MP, with thousands of jobless graduates, the unemployment rate among young people in Gaza rose to %65.

He pointed out that Gaza's per capita daily income, if there is any, is less than $2, which is the lowest in the world, while 85% of the Palestinians in Gaza live below the poverty line.

Al-Khudari appealed to all concerned Arab, Muslim, and international organizations to pressure Israel in 2019 to abide by the UN charters, the four Geneva Conventions, and the Universal Declaration of Human Rights, which criminalize the siege and collective punishment.

He called for increasing the financial support for humanitarian and job-creating projects in the Gaza Strip, which would also improve the services offered to the families in the health, education, and infrastructure sectors.
30 dec 2018
Soldiers Abduct A Palestinian Shepherd In Northern Plains

Israeli soldiers abducted, Sunday, a Palestinian Shepherd in Ein al-Hilwa area, in the Northern Plains of the occupied West Bank.

Human Rights activist Aref Daraghma said the soldiers attacked and abducted Ali Mohammad Awad while herding his sheep, and took him to an unknown destination.

Daraghma added that illegal Israeli colonialist settlers also chased several shepherds in the same area, which is subject to ongoing assaults and violations.

In many occasions, the colonists stole or slaughtered sheep, in addition to attacking the shepherds.
Al-Shuyukhi: Israel waging war on Palestinian economy

Head of the Union of Palestinian Consumer Protection Associations, Azmi al-Shuyukhi, on Saturday said that the Israeli occupation is waging an economic war against the Palestinians.

Al-Shuyukhi said in a press statement that Israeli-backed good smuggling operations in the economic, commercial, and agricultural sectors significantly doubled in 2018.

He added that Israel protects smugglers and supports them to bring all kinds of goods made in Israeli settlements and the 1948 occupied territories to Palestinian markets, with the aim of destroying the Palestinian economy.
28 dec 2018
Israeli Agricultural Products Banned from Palestinian Market

The Palestinian government decided, on Thursday, to ban entry of Israeli vegetables, fruits and poultry into the Palestinian market, following an Israel ban on import of similar Palestinian products.

Israel took its action against the Palestinian produce after the Palestinians decided not to allow, into their markets, live sheep imported by Israelis, in order to protect the local livestock farmers.
27 dec 2018
Limited Israeli incursion in central Gaza Strip

A similar armed attack was carried out east of the southern Gazan city of Khan Younis.

No casualties have been reported.
26 dec 2018
Israeli Soldiers Demolish A Car Repair Facility Near Nablus

The WAFA Palestinian News Agency has reported that the soldiers demolished the facility, owned by Raja Daraghma, located near the main road between Ramallah and Nablus.

It added that Daraghma’s car repair facility was attacked by soldiers and colonialist settlers in many previous incidents.

It is worth mentioning that the Palestinians have been denied the right to build in that area since Israel occupied the rest of Palestine in 1967, while their existing homes and facilities witness frequent invasions and violations.
Elderly Palestinian injured in settler attack near Nablus 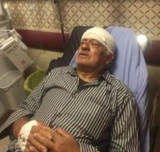 An elderly Palestinian man was injured on Wednesday in an Israeli settler attack near Burqa village, northwest of Nablus city.

Anti-settlement activist Ghassan Daghlas said that a group of Israeli settlers brutally assaulted Mufid Hejji, 70, while he was herding his sheep on his farmland near the evacuated settlement of Homesh, which had been established on Palestinian-owned lands in Burqa.

Hejji, who suffered some head injuries, was taken to Rafidia Hospital in Nablus for treatment, Daghlas added.
25 dec 2018
IOF prevents Palestinian farmers from plowing their lands

The Israeli Occupation Forces (IOF) prevented on Tuesday Palestinian farmers from plowing their lands south of al-Khalil city, in the southern West Bank.

Local activist Rateb al-Jabour said that Iaraeli forces also seized an agricultural tractor belonging to one of the farmers.

The incident occurred near the illegal settlement of Avigal that was built on Yatta town land, he pointed out.
Illegal Colonists Cut 200 Olive Saplings Near Hebron

Illegal Israeli colonialist settlers from Beit Yair colony, which was built on Palestinian lands east of Yatta, south of the southern West Bank city of Hebron cut and uprooted, on Tuesday morning, at least 200 olive saplings.

Rateb Jabour, the coordinator of the National Committee against the Annexation Wall and Colonies in southern West Bank, said the colonists invaded a Palestinian olive orchard, owned By Barakat Mohammad Morr, and uprooted more than 200 saplings.

He added that the colonists, from Susiya illegal outpost, also invaded Palestinian lands, owned by members of Nawaj’a family, and plowed them.
24 dec 2018
Palestinian farmers rally over Israeli ban on export of vegetables

Dozens of Palestinian farmers rallied on Monday at the Jalama checkpoint, north of Jenin, protesting Israel’s ban on the export of vegetables to territories occupied in 1948.

Palestinian farmer Ahmad Saba’na said the ban has resulted in financial damage as hundreds of kilograms of fruits and vegetables have been piled up for eight days running.

He added that hundreds of farmers are on the verge of going bankrupt due to the Israeli measures.

The witnesses told the PIC reporter that the industrial area of Ariel settlement is being expanded at the expense of fertile farmlands owned by Palestinian citizens in Salfit.

The Palestinian researcher Khaled Ma'ali said that many bulldozing operations are taking place in different villages and towns in Salfit in favor of settlement expansion projects.

Ma'ali stressed that the settlement expansion blatantly violates international humanitarian law, which prohibits settlement and any construction activity by the occupying power on the territories it occupies.
Room demolished, Palestinian arrested in al-Khalil

Eyewitnesses said that the Israeli occupation forces arrested the Palestinian citizen Nader Abu Mayyala at a military checkpoint near the city.

The witnesses said that the Israeli forces further opened fire at a Palestinian vehicle passing through a checkpoint at the northern entrance to al-Khalil. No injuries were reported.

Local sources said that earlier on Sunday the Israeli forces installed a checkpoint at the northern entrance to al-Khalil, searched the Palestinian vehicles passing in the area, and scrutinized the passengers' IDs.