In an interview with Israeli Channel 2, the Turkish President dismissed categorizing Hamas as a terrorist organization, calling it an elected political party and a national movement born out of a legitimate struggle for liberation.

He said the Israelis should rather negotiate with Hamas—the people’s elect—after they failed to reach a deal with the Palestinian Authority (PA) President Mahmoud Abbas following decades of stalled peace talks.

Asked whether he was confident Hamas would not import resistance weaponry to Gaza, Erdogan responded: “I cannot guarantee anything. Who can guarantee that Israel does not attack Gaza anymore?”

Commenting on a question about the Israeli soldiers held captive by Hamas, Erdogan said that thousands of Palestinians are locked up in Israeli jails and that an exchange should be negotiated to release the detainees.

He expressed his readiness to broker prisoner swap negotiations should Israel show a readiness to free the Palestinian captives.

As regards the normalization deal with Israel, Erdogan reminded the audience that the accord saw the day following three provisos set by Turkey: Apologizing over the deadly attack on Marmara, shelling out compensations, and lifting the siege on Gaza.
3 july 2016
Palestinian Child, 3, Dies From Wounds Suffered In Istanbul Bombing 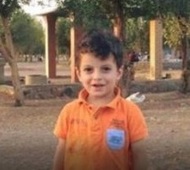 On Saturday, a Palestinian child, identified as Rayyan Shreim, only three years of age, became the third Palestinian to be killed due to the terrorist bombing and shooting attack that struck Ataturk Airport in Istanbul, Turkey, on June 28th.

The child died from his serious wounds, Saturday, while his mother and another Palestinian woman were killed in the aftermath of the bombing, and his father was injured.

Shreim was from Qalqilia city, in the northern part of the occupied West Bank; a Turkish hospital initially said he died in the bombing, but it he was still alive, yet in a very serious condition, and died from his wounds, Saturday.

The child was with his mother, Sondos, who was killed in the bombing, and his father Mohammad Shreim, when they traveled from Saudi Arabia to Turkey, to vacation for three days before traveling to Palestine to celebrate Eid Alp-Fitr Muslim feast with the rest of the family in Qalqilia, in the northern part of the occupied West Bank. Sondos was a teacher and was living with her family in Jeddah, Saudi Arabia.

Accompanying the family was Marwan Abu Salhiyya, his wife Nisreen Hashem Hammad, 28, and their child, Rafeef, from Arraba near Jenin, in the northern part of the West Bank.

Nisreen was killed in the bombing, while Marwan and their daughter, Rafeef, suffered moderate injuries.

The Shreim family went missing for a while after the attack, and were later located in a hospital suffering serious wounds, but Sondos died from her wounds, then her child died Saturday (June 2nd), while the husband, Mohammad, is currently in a stable condition.

Journalist Moath Hamed, who is currently in Turkey, said the family and the Palestinian Embassy in Turkey are working on moving the body of the slain child back to Palestine, and added that a funeral ceremony will be held at the Airport in Istanbul.

Turkish officials said 44 persons were killed, and 147 were injured, in the terrorist attack. Two of the three attackers were killed, and although their identities have not been revealed yet, officials believe they are from Uzbekistan and Kyrgyzstan.

The Palestinian Foreign Ministry has reported, Thursday, that two Palestinian women have been killed, and seven others Palestinians have been wounded, in the terrorist attack that targeted Ataturk Airport in Istanbul Turkey, leading to the death of 42 persons.

The ministry said that Sondos Abdul-Halim Basha, from the northern West Bank city of Qalqilia, died of her wounds, and that another woman, identified as Nisreen Hashem Hammad, 28, from Arraba near Jenin, died in the attack. 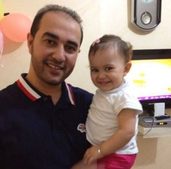 Hammad’s Husband And Daughter Who Were Injured In The Attack

Hammad was a teacher and a married mother of one daughter, 4 years of age, and was living with her family in Jidda, Saudi Arabia. Her husband, Marwan, and their daughter, Rafeef, were injured.

Palestinian Ambassador in Turkey Faed Mustafa said that the remains of the two slain Palestinian women will be transferred to Palestine after concluding all needed preparations, and added that seven Palestinians are currently receiving treatment in a number of Turkish hospitals, after suffering mild-to-moderate injuries.

Palestinian Foreign Minister Riyad al-Maliki said his ministry isclosely following the developments, and the outcome of this terrorist bombing, adding that President Mahmoud Abbasordered the formation of a crises committee in the Palestinian Embassy and in the Foreign Ministry, in order to provide the needed aid.
Powered by