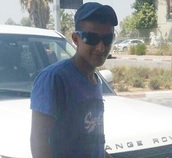 Victim, shot while carrying out reinforcement work on the security fence between Israel and Egypt, succumbs to wounds sustained after an Egyptian border policeman allegedly opened fire in an apparent misunderstanding; Israeli investigation rules out potential terror attack and border smuggling as cause of gunshots; victim's father holds IDF responsible.

A 15-year-old contractor working for the defense ministry was killed Tuesday afternoon after sustaining at least one gunshot wound while carrying out reinforcement work on the fence on the Israel-Egypt border.

The fire appears to have emanated from Egyptian territory, and hit in the Mt. Harif area of the Israeli Negev. A joint investigation carried out by IDF officers and their counterparts in Egypt revealed that the victim, later identified as Nimer Bassem Abu Amar from the Bedouin town of Lakiya, had been accidentally shot for reasons which remain unclear.

Attempts by medics to save the Abu Amar were ultimately to no avail as he succumbed to his wounds while being evacuated to the Soroka Medical Center in Beer Sheva.

Initial assessments indicated the gunshots came not as a result of an attack but rather as a result of a misunderstanding which ensued, according to a reported quote by Egyptian security officials, following an exchange of fire between Egyptian border police with a drug smuggler on the border.

However, Israel later categorically ruled out the possibility that a terror attack or a smuggling attempt on the border had led to the shots. Moreover, it later emerged that the fatal shot had been fired by an Egyptian likely from the border police stationed at the usually calm border.

Further details of the ongoing investigation appeared to confirm that the circumstances surrounding the incident were accidental. Abu Amar was reported to have been standing inside an enclave on the Israeli side of the fence in the Mt. Harif area as part of routine fence reinforcement work which was coordinated in advance between the Egyptian and Israeli militaries.

Mistakenly believing that Abu Amar was a suspect inside Egyptian territory, the Egyptian security forces opened fire. An escalation of violence was averted by dint of the fact that IDF soldiers stationed at the scene understood that the shots resulted from confusion.

Commenting on the incident, Abu Amar's father, Bassem said that he held the IDF fully accountable, citing its failure to provide protection during the work.

"I blame the Defense Ministry for the death of my son. There was no security by the IDF for the workers during the work," he said. "The soldiers left and only returned after they heard bursts of gunfire, and even then they did not respond."

Abu Amar’s father also said that his son had been working on the site for a number of days and arrived at the spot of the incident “in order to make a cup of coffee” for his fellow workers, all of whom are from the same family.

“My family took him to the crossing...A lot more people could have died. Where is the prime minister? Where is the defense minister? It is very simple. The army abandoned those who were working there.” The father added that he did not blame the co-workers for taking his son to the site.

The family’s anger was further exacerbated by the fact that no representative from the defense ministry or the IDF, it was reported, attended the mourning tent to console the begrieved family.

MK Omer Bar-Lev (Zionist Union) heaped criticism on the government for employing children into the ranks of the defense ministry. “It is shocking that the defense ministry employs children. The defense ministry is far too big to try and hide behind the private contractor that employs 15 year olds,” he said. "I intend to initiate an urgent discussion in the Foreign Affairs and Defense Committee at the beginning of the winter session next week.”

Route 10, which runs along the border, has been closed to traffic since a terror attack which occurred there  in 2011. It was opened to traffic during the Sukkot holiday, but has since been closed again.

The fence—made up of steel, electric detection cables and barbed wire—which runs the length of the Israel-Egypt border, has been instrumental in stemming the flow of drug traffickers, terrorists, and illegal immigrants infiltrating into Israel.

An Israeli worker at the Israeli Army Ministry was reportedly shot and killed in southern Israel near the border with Egypt on Tuesday afternoon.

According to Israeli media sources, the worker was shot and wounded adjacent to the Egyptian border.

The bullet came from across the border in Egypt, the sources said.

Israeli media later reported that after being evacuated by an Israeli air force helicopter to Soroka Medical Center in Beersheba, the Israeli worker succumbed to his wounds.

The man was doing maintenance work on the border fence when he was shot. According to Israeli news site Ynet, he was contracted by the Israeli Army Ministry.
20 oct 2016
Red Cross director calls on Egypt to facilitate Gazans’ travel

Director the International Committee of the Red Cross office in Gaza Strip Mamadou Sue called Wednesday on the Egyptian authorities to facilitate the travel of Palestinian travelers via Rafah border crossing.

During a press conference following his visit to Rafah crossing, Mamadou Sue described the humanitarian cases at the crossing as “painful.”

"I met several patients who waited for long years before being allowed to travel for medical treatment, and students banned from travelling abroad although they possess valid passports and entry visas to western countries," he said.

"We call on Egyptian authorities to facilitate the patients and students’ access out," he urged.

It is a matter of life and death, he said, expressing hope that Rafah crossing will be permanently open.

The Egyptian authorities reopened on Wednesday the Rafah border-crossing on both sides so as to allow humanitarian cases’ access out of and into the blockaded Gaza Strip.

The Egyptian authorities closed the Rafah border crossing with Gaza on October 25, 2014, leaving thousands of Gazans, mostly humanitarian cases, stranded on both sides of the Gaza-Egypt borders.

The Egyptian blockade, along with a decade-long blockade imposed by the Israeli occupation authorities on the coastal enclave, have made life horrendous in the besieged territory.
Egypt releases 7 Palestinian pilgrims

According to the PIC reporter, the seven pilgrims reached the crossing in very good health condition after one-month detention in Egypt.

The pilgrims were arrested in Cairo airport shortly after their arrival from Saudi Arabia without any known reasons.
11 oct 2016
Gaza Ministry: Reports on Egypt opening of Rafah crossing counterfeit

Gaza’s Interior Ministry on Tuesday called on the mass media to stop releasing counterfeit pieces of news on the opening/closure of the Rafah border-crossing, blocked by the Egyptian authorities.

Spokesperson for the Interior Ministry Iyad al-Bazm slammed the reports recently released by unidentified news outlets on Egypt’s opening of the Rafah border-crossing.

He said such counterfeit reports have sparked a state of panic among Gaza’s stranded passengers and humanitarian cases.

According to al-Bazm, it is just unacceptable to deepen Gazans’ wounds by chasing incorrect data.

He called on the mass media to scrutinize the accuracy of such pieces of news and refer to official authorities for the truth.

Director of the Rafah Border crossing Hesham Udwan also said he has not been updated on any decision by the Egyptian authorities to open the passageway before stranded passengers and humanitarian cases.

Udwan called on Egypt to unblock the crossing so as to alleviate the sufferings of the stranded Gazans.

He added that over 25,000 humanitarian cases have been registered for urgent travel via the crossing.

Egypt closed the Rafah border-crossing on October 25, 2014 and opened it only sporadically before Gaza’s humanitarian cases.

The situation has gone far worse in the besieged enclave due to a nearly one-decade long blockade imposed by the Israeli occupation authorities on the coastal territory, a home to over 1.8 million Gazans.
24 sept 2016
Israeli and Egyptian navies open fire at Gaza fishermen

Israeli and Egyptian gunboats on Saturday opened machinegun fire at Palestinian fishermen off the northern and southern shores of the Gaza Strip.

According to Quds Press, the Israeli navy opened fire at Palestinian fishermen off the coast of Gaza City.

Simultaneously, a similar gunfire attack was carried out by Egyptian naval troops off the coast of Rafah, north of Gaza.

The Egyptian navy had opened fire several times before at Palestinian fishermen, with no reason. Luckily, none of the fishermen was hurt in the shooting attacks.
23 sept 2016
Palestinian injured by shrapnel from Egyptian projectile in Rafah

A Palestinian security man on Thursday afternoon suffered a shrapnel injury when an Egyptian projectile fell and exploded in a Palestinian border area of the Gaza Strip.

According to local media sources, the projectile was fired from Egypt and exploded near Palestinian homes in Rafah.

One member of the national security apparatus suffered a moderate shrapnel injury as a result of the explosion and was provided with medical assistance.

In this regard, a spokesman for the Palestinian interior ministry in Gaza demanded the Egyptian authorities to investigate the incident, especially after the repeated fall of several projectiles from the Egyptian side in Gaza in recent times.
27 aug 2016
Bicycle rally in Gaza for releasing the abducted four men

Palestinian youths participated in a 40-kilometer bicycle rally from Gaza city to Rafah Crossing gate Friday morning calling for the release of the abducted four Gazans in Egypt.

The participants wore T-shirts with photos of the kidnapped on them and read “return the abducted”. The event was initiated after a leaked photo of two of the kidnapped showing them held under a humiliating tough condition in an Egyptian jail was published last Monday.

Al-Qassam Brigades, the armed wing of Hamas Movement, announced then that the four men are members in the Brigades. Hamas, for its part, held the Egyptian authorities fully responsible for their lives and called for releasing them and ending their suffering.
25 aug 2016
Sit-in in Gaza for releasing the abducted four Gazans in Egypt

Palestinian Women Movement Thursday staged a sit-in in Gaza demanding the release of the four Gazan people who were kidnapped by gunmen in Sinai in Egypt on August 19, 2015.

In his speech at the event, MP Marwan Abu Ras, deputy on Hamas Movement, stressed the necessity of releasing the four abducted men and ending their suffering.

They were abducted after passing Rafah crossing while heading to Turkey through Egypt for treatment and study purposes.
Page:  6 - 5 - 4 - 3 - 2 - 1
Powered by