Israeli forces sealed off today all entrances to the village of Kisan, east of Bethlehem, in the southern occupied West Bank, as a prelude to take over a piece of land there, said a local official.

He said Israeli forces informed him of their intentions to take over a piece of land in the village, where a new school project has begun a few days ago.

Forces said they will also confiscate all equipment there.
2 feb 2020
Israel occupation suspends entry of cement to embattled Gaza

According to Maariv newspaper, the Israeli army gave instructions, at the behest of Bennett, to suspend cement exports to Gaza and withdraw permits from 500 cement dealers.

The measure, which is to take effect as of Sunday morning, was reportedly in response to daily Gaza attacks, which resumed recently after the Israeli occupation authority deliberately opened floodgates to dams and flooded vast tracts of farmlands and roads in the east of Gaza, causing considerable losses to the agricultural sector in particular.
27 jan 2020
Israeli forces stop rehabilitation of school’s courtyard in Hebron area

Israeli forces seized a bulldozer and an excavator owned by a Palestinian resident in the village of Susiya, in the south Hebron Hills, the southern occupied West Bank, said a local official.

Head of Susiya village council, Jihad al-Nawaja, told WAFA Israeli forces stormed an elementary school in the village and seized a bulldozer and an excavator working on the rehabilitation of the school’s courtyard.
26 jan 2020
Soldiers Abduct A Palestinian, Confiscate A Bulldozer In Nablus

Israeli soldiers abducted, Sunday, a former political prisoner, and summoned another Palestinian for interrogation, in addition to confiscating a bulldozer in the northern West Bank governorate of Nablus.

Daghlas added that the soldiers also invaded the home of Mo’in Sha’er, and summoned him for interrogation.

Israeli occupation authorities gave 1% of Palestinians a license to build on Area C of the occupied West Bank from 2016 to 2018, Hebrew media sources reported.

Area C constitutes 60% of occupied West Bank lands that fall under Israel sovereignty, according to the Oslo agreement which was signed in 1993, between the Palestinian Liberation Organization and the Israeli occupation.

According to Haaretz, Palestinians have submitted some 1.485 requests for a building permit in Area C of the West Bank, between 2016 and 2018.

Meanwhile, statistics from Israeli civil administration revealed that 1,147 notices of demolition were issued against Palestinian structures in Area C, under the pretext of unlicensed building.

Israeli civil administration claimed that it had issued about 56 building permits for Palestinians, but 35 of these were not submitted.

With regard to the Jahalin tribe in Khan al-Ahmar, east of Jerusalem, who live near the settlement of Ma’aleh Adumim, and to the al-Jabal al-Gharbi neighborhood near al-Eizariya, these permits were not applied.

Therefore, the final data on the percentage of requests submitted by Palestinians, compared to what was approved, is much lower, according to the newspaper.

From 2000 until 2018, Palestinians submitted 6,532 applications for building in Area C and only 210 of them were approved, constituting 3.2 % of the applications.

One of the main problems, with the reality of planning in Area C, is the small number of structural maps of the Palestinian villages, which allow planning for construction and granting permits, whereas they need approval from the Israeli political level, the paper stated.

Of the 240 Palestinian villages that are fully defined as part of Area C, only 27 villages have approved structural charts, Al Ray further reports.

The area in which Palestinians can legally build within the framework of approved maps, which are essentially aimed at restricting development, is 0.5 % of Area C, while the area of settlement maps is about 26 %.

Lawyer Qamar Asaad, from the Haqel organization that specializes in West Bank land law, believes that the problem lies with the lack of planning for the Palestinians.

She said that Palestinians are not represented in the planning committees and the maps prepared by the Palestinian councils are not being submitted and approved. Israel is not interested in planning, and permits are not enough.

She added that Israeli planning authorities systematically refuse, contrary to their obligation, to grant building permits or to regulate construction in the West Bank, and in fact deliberately prevent any possibility of legal Palestinian construction in this area.

The international community considers Area C as a part of occupied Palestine and the state of Palestine. It also considers Israeli settlements illegal under Fourth Geneva Convention, which prohibits the occupying power from transferring Israelis to the occupied territories.
16 jan 2020
Israel Demolishes School Foundation Near Hebron, Closes Two Schools in Jerusalem

Israeli forces, Thursday, demolished the foundations of a new school that was in the process of being built, east of Yatta town, south of the southern occupied West Bank city of Hebron, according to Rateb Jabour, member of the National and Popular Committee Resisting the Wall and Settlements.

Jabour added that Israeli soldiers came to the school, located close the illegal Israeli settlement of Beni Hefer, and began to demolish the foundation laid out for the construction, and no advance notice given to school administration.

In related news, Israeli forces, on Tuesday, prevented the opening of the second semester for two schools in the occupied Palestinian city of Jerusalem, Alray reported. Palestinian schools Al-Wad al-Sadiq and Al-Fursan, were closed under the pretext that the schools lack construction permits.

In their bid to impede Palestinian education in remote villages, Israeli forces today demolished the foundations of a new school that was being built east of Yatta town in the south of the occupied West Bank, according to Rateb Jabour, member of the National and Popular Committee Resisting the Wall and Settlements.

He told WAFA that Israeli soldiers came to the school that was being built between Yatta and Bani Naim in an area close the illegal Israeli settlement of Beni Hefer and began to demolish the foundation laid out for the construction of the school.

He said that no prior notice of demolition was given to the school administration.

The school was intended to serve children in the remote villages who often have to travel long distance and through rough and hazardous terrain to reach their schools in nearby towns.
13 jan 2020
Israeli forces stop work on land rehabilitation project in Ramallah-area village

Israeli forces today stopped work on a project to reclaim and rehabilitate lands and pave agricultural roads in the village of al-Mughayyir, east of Ramallah, under the pretext that the area is classified as Area C, under full Israeli administrative and military control.

The project supervisor, Engineer Fajer 'Atawneh, told WAFA correspondent an Israeli military force stormed the area where the land is being reclaimed and forced project workers to stop working before seizing a heavy machinery that was working on the opening of two-kilometers of agricultural roads and the rehabilitation of 70 dunums of the village’s land.

He said that the roads were part of a project implemented by the Agricultural Development Society - Palestinian Agricultural Relief – for the rehabilitation of around 400 dunums of land and the construction of two km of agricultural roads.

The project aims at serving farmers and enhancing their resilience in areas most affected by the presence of the occupation in villages to the northeast of Jerusalem and in the village of al-Mughayyir.

Director of Land Development at the society, Muqbel Abu Jaish, called on all relevant governmental and human rights institutions to pressure the Israeli occupation to stop such violations against Palestinian residents' land, and halt all settlement activities and the seizure of land in accordance with international resolutions.
4 jan 2020
Israeli Forces Halt Construction of Palestinian Home Near Bethlehem 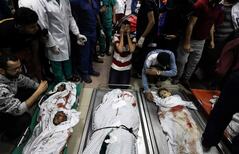 Israeli military ordered, on Saturday, a halt on the construction of a Palestinian-owned house in the village of Nahalin, near Bethlehem city.

In addition, the soldiers seized building equipment, including a pump and two cement mixers, according to the Palestinian News and Info Agency (WAFA).

Hani Fannoun, head of Nahalin municipality, said that an Israeli military force stormed the site of the construction and ordered the workers to stop the work, under the pretext of lack of an Israeli building permit.

The area, in the southern occupied West Bank, is classified as C, which makes up about 60 percent of the West Bank and is under full Israeli administrative and military control, where Israel rarely issues construction permits to Palestinians, forcing them to build without one.
Page:  2 - 1
Powered by