The Palestinian Ministry of Information protested, on Wednesday, Facebook’s closure of the official page of Palestinian President Mahmoud Abbas’ Fateh party — apparently over a picture of the late Palestinian leader Yasser Arafat carrying a weapon — as well as the page of a local radio station.

The Ministry, according to WAFA correspndence, described the move as “blind bias toward the (Israeli) occupation and standing on the side of the executor who advocates terrorism and hate through the media.”

It said, in a statement, that Facebook has always denied any collaboration with Israeli authorities, but this move proves otherwise.

“Facebook is expected now more than any other time to define its understanding of freedom of expression and claims of incitement by an occupying power that acts as if it is above the law,” it added.

The Ministry said Facebook “has closed its eyes to Israeli incitement against Palestinians and calls for murder on its pages while at the same time it went after voices calling for freedom and end to occupation.”

It called on Facebook to go back on what it described as its “unjust” decision, adding that “whoever claims they are for freedom of expression and opinion around the world should not stand on the side of occupation, racism and terrorism that is acting against the Palestinian people’s aspiration for freedom.”
28 feb 2017
Qassam Brigades condemns closure of its twitter account

The Brigades vowed to deliver its mission via different ways.

Three days ago, twitter administration blocked the official account of the Brigades’ spokesman Abu Ubaida.
25 feb 2017
“Palestine brings us together” campaign gets 50,000 posts

The electronic campaign which was launched by Palestinians Abroad Conference on Friday under the hashtag “Palestine brings us together” received a large scale interaction estimated at over 50,000 posts.

The number of tweets at both hashtags: “Palestine brings us together” and “Palestinians abroad” exceeded 50,000 tweets.

The participants also stressed the importance to hold conferences that shed light on the suffering of Palestinians in diaspora and affirmed their adhering to the right of return.
30 jan 2017
Dareen Tatour’s Prosecution for Poetry Continues in Nazareth Court

Palestinian poet Dareen Tatour testified before the Magistrate’s Court in Nazareth on Thursday, 26 January; Dareen’s saga has lasted for nearly a year and a half as she faces prosecution and imprisonment for writing a poem, “Resist my people, resist them,” and posting it on YouTube.

Arrested from her family home in the village of Reineh on 11 October 2015, Tatour, a Palestinian citizen of Israel, was imprisoned for several months in Kishon, Damon and HaSharon prisons on allegations of “incitement,” and she was then transferred to house arrest.

For several more more months, she was confined to an apartment in the Tel Aviv area; due to the restrictions of her house arrest, her brother and sister-in-law had to leave work and school to permanently accompany her; she was finally transferred to house arrest in her home village of Reineh but remains subject to severe restrictions and must wear an electronic ankle bracelet at all times. She is prohibited from using the internet.

Hundreds of internationally renowned writers and artists, including Edwidge Danticat, Ahdaf Soueif, Alice Walker, Eve Ensler, Ariel Dorfman, Russell Banks and Barbara Hammer, have called for Tatour’s release and the dropping of charges against her, a call endorsed by PEN, the international freedom of expression association.

Despite the widespread support for Tatour and the almost farcical nature of the charges against her, she faces up to eight years in prison. The arrest and prosecution of Tatour also comes in the context of a long history of occupation persecution of Palestinian writers and artists, including such former prisoners as Mahmoud Darwish, Samih al-Qasim and Tawfiq Zayyad, like Tatour, Palestinians from occupied Palestine ’48.

Despite the lengthy proceedings stretching over four months, Tatour’s case will continue for several more hearings. There will be three more upcoming hearings in the case before a judgment is issued, and those sessions will convene on 19 March, 28 March and 5 April.

Learn more about the case at the Free Dareen Tatour facebook.

The comment was swiftly rejected by leaders of the Jewish community in Mexico, and prompted an unusually blunt statement from Mexico's foreign ministry.

"The Foreign Ministry expressed to the government of Israel, via its ambassador in Mexico, its profound astonishment, rejection and disappointment over Prime Minister Netanyahu's message on Twitter about the construction of a border wall," the ministry's statement read.

The Central Committee of the Jewish Community in Mexico issued a statement saying it "forcefully rejected" Netanyahu's comment, while several prominent Mexicans of Jewish origin sharply criticized the Israeli leader on Twitter.

Mexico's government and Trump have been locked in a bitter dispute over his election campaign promise to build a wall on the U.S. southern border that he says Mexico will pay for. Mexico has repeatedly said it will not pay for the wall.
28 jan 2017
Hamdallah Calls on Apple and Google to Include Palestinian Communities in Online Maps 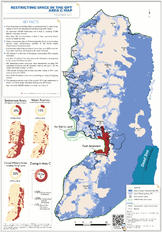 PA Prime Minister Rami Hamdallah has, today, urged both the Apple and Google computer companies to include all Palestinian communities in the occupied West Bank in their online maps.

“It is baffling that, while Palestinians in Area C can´t even find their own community on either maps, Israeli settlers can get driving directions to cross the West Bank in its entirety to get from one illegal settlement to another,” he said, according to the PNN.

A number of publications and independent sources have published detailed maps that include each and all of the Palestinian communities across the West Bank, including remote and isolated villages. Google Maps and Apple Maps show Palestinian towns in “Area A” and “Area B” of the West Bank, as well as Israeli settlements, which are illegal under international law and according to  UNSC Resolution 2334.

Yet, the majority of Palestinian communities in “Area C”, some of which count several thousand inhabitants, are not featured in the maps of either companies.

“Area C is an integral and vital part of the State of Palestine. It is our sincere hope that this omission will be resolved in the near future and that all Palestinian residents will see their communities listed on Google and Apple maps,” added Hamdallah.

“Area C”, as defined by the 1995 Oslo Agreements, covers some 64% of the West Bank. According to the Palestinian Central Bureau of Statistics, nearly 350,000 Palestinians reside in 532 communities in “Area C”,across the West Bank.
27 jan 2017
Hamas hackers continue anti-Israel cyber attacks

Hebrew-speaking Channel 2 quoted the head of Israel’s investigation department as stating that Hamas hackers used six fake accounts to entrap a number of soldiers and obtain access to private data.

The Israeli officer said efforts have been in full swing to chase down the Hamas network.

Yedioth Ahronoth newspaper has claimed that hackers from the Shin Bet, Israel’s internal intelligence agency, were able to frustrate a massive cyberattack against Israel.

The newspaper quoted a Shin Bet official as saying that foreign hackers planned to take over television and radio broadcasts with the intention of inducing public panic.

The Shin Bet’s cyber unit, whose members are a selected bunch of young cyberpunks, studied the cyberattackers’ techniques and took note of their working hours before launching a virtual counterattack against them and leaking their personal details online.

15 years ago, about four percent of the Shin Bet's manpower was engaged in cyber and radio espionage activities. However, today, 25 percent of its operatives are dedicated to the virtual realm.

Recently, the Israeli army accused Hamas-affiliated hackers of infiltrating cellphones of Israeli soldiers and officers with the purpose of gathering intelligence, but it refrained from stating if the collected information was sensitive or not.
Radio host fired from Israel Army Radio for Facebook post empathizing with slain Bedouin

An Israeli woman employed as a radio host with the Israeli government-run Army Radio was fired from her job Thursday after expressing on Facebook that she could understand the frustration of a Bedouin man who allegedly ran over a police officer who had come to destroy the Bedouin’s village.

Khen Elmaleh wrote on her Facebook page, “I would also run over a police officer if I were being removed from my home in order to make room for a town built for those more powerful than me”.

Her boss, Army Radio Commander Yaron Deckel, contacted her to fire her from her job – then he tweeted that those who support running over police have no place in the radio station.

It is still unclear whether the Bedouin man, Yaqub Musa Abu Qi’an, ran over the officer on purpose, or if he lost control of his vehicle – as local villagers say. After his vehicle hit the officer, he was shot multiple times and killed.

According to the leftist Israeli +972 magazine, “Elmaleh’s post was a sincere attempt at putting oneself in another’s shoes, but beyond that it also sought to draw a connection between the Bedouin struggle to remain on their land, and the decades-long Mizrahi struggle for public housing and against evictions.

Perhaps Elmaleh thought that expressing empathy with those who have lost or are about to lose their homes — to try and imagine what it might feel like to fight a seemingly endless battle against a government that doesn’t exactly want you here — would strike a chord with Israeli Jews. Perhaps Elmaleh believed that there was solidarity to be had among various the various groups living in Israel who are subject, day in and day out, to the brute force of the authorities. But by early morning the politicians and media had already portrayed Abu Qi’an as an ISIS-supporting terrorists. Elmaleh, in effect, had crossed the Rubicon: she expressed support for the ‘enemy.'”

Following her dismissal from her job, Elmaleh received many comments to her Facebook page – many of them critical of her earlier post, and calling her a supporter of murder and terrorism. She responded, “I do not support murder, and I will not let the headlines turn me into a supporter of murder,” Elmaleh continued, adding that today it may have been the Bedouin fighting for their rights, but “tomorrow it could be Mizrahi residents in south Tel Aviv. How easy is it to turn this whole discussion into one over a ‘vehicular attack.’”
Page:  4 - 3 - 2 - 1
Powered by