UN accuses Israel of hindering its reconstruction efforts in Gaza

The UN accused Israel of obstructing its efforts to rebuild the Gaza Strip and demanded it to end its blockade on the besieged enclave, according to its radio.

The fourth committee of the UN general assembly said the task of rebuilding the Gaza Strip has become more difficult for the UNRWA because Israel is reluctant to approve project applications submitted by the agency.
It added that the obstacles caused by Israel in this regard cost the UNRWA five million dollars of donor funds in 2011.

For his part, UNRWA commissioner-general Filippo Grandi said during a session held with the UN fourth committee that the agency still faces two major threats to the services it provides to the Palestinian refugees, namely, the raging conflicts in the region and the scarce funding.

Grandi warned that Gaza would have half a million more people by 2020 and would become an unlivable place by 2020 unless action is taken to improve basic services in the territory.

In a related context, the Palestinian ministry of economy in Gaza said it would initiate soon 11 vital initiatives for the improvement of the Palestinian economy during the next six months.

In a press release, assistant deputy of the minister Hatem Aweidah said these initiatives represent a priority for the ministry of economy.

Aweidah added that the private sector would take part in these initiatives to achieve the economic plans set the Palestinian government in Gaza.

He stated that the initiatives include the rehabilitation and development of industrial areas in Gaza and the activation of commercial cooperation with Egypt. 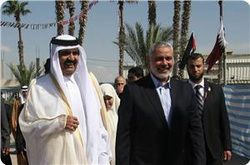 Premier Haneyya stated that Sheikh Hamad decided to raise the budget of the Qatari projects from 254 million to 400 million dollars.

Haneyya explained in the ceremony that the emir agreed to increase the funding of the projects previously reported and to fund new others including the building of residential apartments for ex-detainees and a rehabilitation center for war victims.

In a related context, Sheikh Hamad Al Thani visited during his one-day stay the Islamic university of Gaza where he gave a speech in the evening.

He started his speech by calling on the Palestinian rivals to end the national division and unite their ranks to face the challenges.

"The historical injustice that has befallen the brothers in Palestine is still a humanitarian catastrophe the international community failed to put an end to it," he underscored.

He also hailed the Gaza people for their steadfastness in the face of Israel's aggression and said their fortitude is a source of pride for the Arabs.

"The steadfastness of Gaza was the decisive element and taught the delusional people a lesson about the persistence of the believers in justice; the patience of Gaza was also a lesson for the coward people and a reason for the start of the Arab Spring," the emir said.

At the end of the ceremony that was held in the Islamic university, premier Ismail Haneyya granted Sheikh Hamad and his wife medals of dedication while the presidency of the university awarded them honorary doctorates.

For his part, deputy head of Hamas's political bureau Mousa Abu Marzouk said on his facebook page that the visit of emir of Qatar Sheikh Hamad Al Thani to Gaza was one of his brave steps and positions towards the Palestinian cause in general and Gaza in particular.

Abu Marzouk also said he hoped if head of the Palestinian authority Mahmoud Abbas came along with Sheikh Hamad during his visit to Gaza.

"It would have been good if president Abu Mazen had hastened to visit the Gaza Strip to receive the emir of Qatar and save us time through uniting, ending the division, breaking the blockade and reconstructing Gaza," he stated.

For his part, head of the middle east studies center in Jordan Jawad Al-Hamad said the visit of Sheikh Hamad Al Thani to Gaza on Tuesday was a historical step and a turning point in the Arab political attitude towards the international siege imposed on Gaza.

Al-Hamad told Quds Press that the visit of Sheikh Hamad to Gaza would be the start of a new Arab lobby that can contitute a pressure force not only to end the siege on Gaza but also to support the Palestinian cause and the Arab interests.
23 oct 2012
Thousands of Palestinians have lined along the main roads of Gaza since the early morning hours waving Palestinian and Qatari flags and carrying banners welcoming the Qatari emir and his delegation.

During his brief visit, the emir will inaugurate$254-million Qatari projects to rebuild the impoverished and overcrowded Gaza Strip, which sustained major damage during a huge 22-day Israeli military operation which started in late December 2008.

In this regard, member of Hamas's political bureau Ezzat Al-Resheq welcomed in a press release the visit of Sheikh Hamad Al Thani to Gaza on Tuesday.

Resheq hailed the visit as "historical" and expressed his appreciation to Qatar's role in supporting the Palestinian people and their national cause.
20 oct 2012

Emir of Qatar in Gaza soon to initiate projects

The Qatari Emir Hamad Bin Khalifa Al Thani is due to arrive in the Gaza Strip in the next few days for a three-day visit, a Palestinian official source told Palestine newspaper.

Al Thani will be accompanied by his wife Sheikha Mozah and a delegation of high-level Qatari officials, the newspaper reported on Saturday.

The official source added that the Emir of Qatar would visit Gaza to initiate reconstruction projects agreed upon last month in meetings held in Gaza between Qatari officials and Palestinian premier Ismail Haneyya.

The official pointed out that the visit would be the first of its kind by such an Arab leader and would constitute a lever to officially announce an end to the Israeli blockade on Gaza.

For his part, political advisor to the Palestinian premier Yousuf Rizqa denied there were Qatari prerequisites for its reconstruction projects in Gaza like what was rumored about its request to initiate the projects in the presence of Mahmoud Abbas.

Officials from the Palestinian Authority including Nimer Hammad and Saeb Erekat also said Qatar did not invite Abbas to attend the inauguration of Gaza reconstruction projects.
17 oct 2012 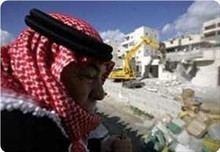 Taku municipality sources told Quds Press that the IOA delivered notifications to those families that their houses, some of them still under construction and others almost completed, were not licensed for building.

They said that the owner of a recently built greenhouse was also notified that it should be knocked down before end of the month.

The buildings are located in area “C” which according to the notorious Oslo accords fell under complete IOA control.
Page: 5 - 4 - 3 - 2 - 1
Powered by