Israeli ministry of education is considering reversing its decision to close down a Palestinian elementary school in Occupied Jerusalem, according to Hebrew daily Yediot Ahronot Friday.

The paper recalled that in February, the ministry decided to shut down the al-Nukbah private school, located in Sur Baher, a Palestinian neighborhood in southeastern Jerusalem, because its coincided with the name of a unit of al-Qassam Brigades, the armed wing of Hamas.

The Israeli higher court endorsed the closure decision based on the allegation that its curricula included incitement against Israel.
Education ministry condemns IOF attacks on Abu Dis schools 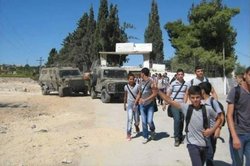 The Palestinian ministry of education has strongly denounced the Israeli occupation forces (IOF) for raiding two schools east of Jerusalem and attacking their students, describing the attack as “a crime.”

In a press release on Thursday, the ministry explained that Israeli soldiers stormed in the morning Jawaharlal Nehru High School and Abu Dis Elementary School in Abu Dis town, east of Jerusalem, amid intensive gunfire.

It added that the soldiers fired live ammunition at a student and injured him, and arrested another during the raids on schools.

Several students and teachers also suffered from inhaling tear gas during the raids.

The soldiers forced all students and teachers to evacuate the schools and prevented crews from the Palestinian military liaison office, the civil defense and the Abu Dis municipal council as well as relatives of students from going in.

Saidam called on media and human rights groups to urgently intervene to curb Israel’s violations against the educational process in the occupied Palestinian territories and protect the students’ right to reach their school.
16 apr 2017
Arrests, home break-ins reported in West Bank sweep by Israeli army

Several Palestinians, including students and academics, were arrested by the Israeli occupation forces (IOF) at daybreak Sunday.

Journalist Ahmed Teim, a resident of Rafidia, said an IOF patrol stormed Palestinian apartments in the area after they smashed all the entrance doors in the hunt for university students.

Other Israeli military troops have been spotted near Amman Street and Joseph’s Tomb, east of Nablus.

At the same time, the IOF stormed the home of the Palestinian student Ibrahim Abed, enrolled at An-Najah University, in Nablus’s western town of Tel.

Lecturer at An-Najah University Dr. Mustafa al-Shanar was rushed to a hospital after Israeli soldiers broke into his family home at the crack of dawn and wreaked havoc on the building, his family told the PIC.

Al-Shanar’s son Assem has also been held in Israeli jails.

Meanwhile, ex-prisoner Aref Ahmed Salim was kidnapped by the Israeli forces from his home in Azzoun town, east of Qalqilya.

The IOF further sealed off the main entrance to the town with a makeshift checkpoint and carried out abrupt combing operations across the area.

The campaign culminated in the abduction of the Palestinian citizen Muhtada Dalal, the son of the slain Palestinian protester Ma’zouz Dalal, from his family home in Qalqilya.
14 apr 2017
Gaza: Education ministry rejects UNRWA schoolbook changes

The Palestinian ministry of education in Gaza has reiterated its rejection of all curriculum changes made by the UNRWA in its schools.

“We have informed the UNRWA that we refuse the changes it has made to its school curriculums in the Gaza Strip,” head of the educational sector Kamal Abu Aoun stated in press remarks on Thursday.

The local news agency al-Ray quoted Abu Aoun as saying that he met with head of the UNRWA education program Farid Abu Adira and called for necessarily reversing the changes made to schoolbooks.

He denied news reports talking that the ministry in Gaza suspended its contacts with the agency in protest at the curriculum changes.
6 apr 2017
Palestinian schoolboy arrested near Ibrahimi Mosque

The Israeli Occupation Forces (IOF) arrested Thursday morning a Palestinian child at a military checkpoint near the Ibrahimi Mosque in al-Khalil.

The PIC reporter quoted eyewitnesses as saying that the 16-year-old boy Ahmed Ghaith was arrested while passing at Abu Rish military checkpoint for allegedly having a knife in his possession.

A round of home break-ins and arrests were reported at daybreak Sunday as the Israeli occupation forces (IOF) rolled into West Bank provinces.

Reporting from al-Khalil, in the southern West Bank, a PIC news correspondent said the IOF rolled into Bab al-Zawia and al-Shuhadaa Street in several army jeeps and bulldozers and leveled Palestinian lands.

Three Palestinian ex-prisoners were kidnapped by the occupation forces from their homes in al-Khalil’s northern town of Beit Ummar.

According to Awad, 46 Palestinians, mostly youngsters and minors, have been kidnapped by the IOF from Beit Ummar since the start of 2017.

On Saturday evening, two Palestinian youths—Mohamed Abu Akr and Majdi al-Natsheh—were kidnapped by the Israeli border cops near the Ibrahimi Mosque, in the Old City of al-Khalil, after they had been subjected to heavy beating and to strip searches on suspicion of holding knives.

The Israeli radio said five Palestinians were arrested by the army forces. The list included two youngsters in their early twenties from Bethlehem.

Meanwhile, 15 Israeli patrols stormed Nablus province and cordoned off the family home of the slain Palestinian youth Ahmed Ghazal, fatally shot by the Israeli army in Occupied Jerusalem on Saturday. Ghazal’s family members had been subjected to exhaustive interrogation in the process.

At the same time, the IOF stormed the environs of the An-Najah old campus and closed al-Bukhary bookshop owned by prisoner Alaa al-Tirawi, who was arrested on October 5 on account of his affiliations with Hamas resistance group. The closure is to be in effect until May 31, 2017.

Clashes reportedly burst out in Qalqilya’s eastern town of Gios moments after they IOF stormed the area and attacked the Palestinian anti-occupation youth with randomly-unleashed spates of teargas canisters.

A military checkpoint was further pitched by the Israeli forces at the main entrance to Azzoun town, where Palestinian vehicles and civilians had been made to endure intensive searches.

The assault culminated in the abduction of youngster Othman Redwan from Azzoun at predawn.
14 mar 2017
15-year-old boy brutally attacked, arrested in al-Khalil

The Israeli Occupation Forces (IOF) brutally attacked on Tuesday morning a 15-year-old boy before being arrested and taken to an unknown detention center.

The boy Yazin Amer was detained at a military checkpoint while on his way to school in al-Khalil after being severely beaten by Israeli forces, local sources affirmed.

A similar raid was carried out in Jabal Abu Roman area where a young man was arrested from his house.
Schoolchildren attacked, minor kidnapped by Israeli forces in Tekou’ 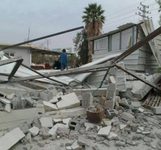 According to local sources, Israeli army patrols stormed Bethlehem’s eastern town of Tekou’ and attacked Palestinian schoolchildren on their way back home.

The Israeli soldiers chased down the Palestinian learners across Tekou’ streets and alleys, amid heavy discharge of gunfire and teargas canisters.

Abu Mufrih added that the boy was kidnapped shortly after the end of the school shift on allegations of hurling stones at the occupation patrols.
9 mar 2017
PPS: “Israeli Soldiers Abduct Thirty-Two Palestinians, Including Children, In The West Bank”

The Palestinian Prisoners’ Society (PPS) has reported that Israeli soldiers abducted, since Wednesday evening until morning hours Thursday, thirty-two Palestinians, including children, between the ages of 11 and 15, and a female legislator, in different parts of the occupied West Bank.

The Hebron office of the PPS in the southern part of the West Bank, has reported that the soldiers invaded and ransacked many homes in the district, and abducted eight Palestinians, including a female legislator.

In Nablus, also in the northern part of the West Bank, the soldiers searched homes and abducted three Palestinians, identified as Jihad Nashata, Assef Tayyim and Suleiman ‘Oweiss.

In occupied Jerusalem, the soldiers stormed and ransacked dozens of homes, including in Qalandia refugee camp, interrogated many Palestinians, and abducted nine, including children, between the ages of eleven and fifteen.

Also in Jerusalem, soldiers and personnel of the tax department, invaded many stores and homes, in Salaheddin Street and in Silwan town, and abducted two Palestinian shop owners, forcing many others to shut their stores down.

The two have been identified as Jawad Abu Sneina, who was taken prisoner near the al-Aqsa mosque, and Waseem Abu Bader, in the al-‘Abbasiyya neighborhood, in Silwan town.

In addition, the soldiers attacked several schoolchildren in Wadi Hilweh neighborhood in Silwan, allegedly after “throwing rocks” at a colonialist outpost.

In Qalqilia, in the northern part of the West Bank, the soldiers and abducted three Palestinians, identified as Mahmoud Kayed Abu Adwan, Ibrahim Talal Shreim and Nidal Ahmad Hussein.

In Salfit district, the soldiers abducted one Palestinian, identified as Emad Raja ‘Ayyash, after breaking into his home and searching it.

Another Palestinian, identified as Mohammad Mahmoud Abu Shouka, from Gaza, was abducted at the Container military roadblock, near Bethlehem.
Page:  3 - 2 - 1
Powered by